Whenever I spend more than an hour tracking down some trivial bit of knowledge, I re-post it. As a writer, I’m constantly hacking away at the visual pile of refuse that computer programmers keep piling onto my software interface. 97% of the features in Microsoft Word are not needed by writers, and generally retard writing like piles of old leaves blocking one’s escape tunnel from writers’ block.

Instead, I like to see a blank black screen with large white or gray letters, and NO MENUS. Sans distraction, words flow at the rate ketchup drips out of a bottle, and this is a bit faster than I see with a cluttered menu-heavy wordprocessor. To get a writer-friendly minimalist interface, I strongly endorse Atlantis Word Processor: 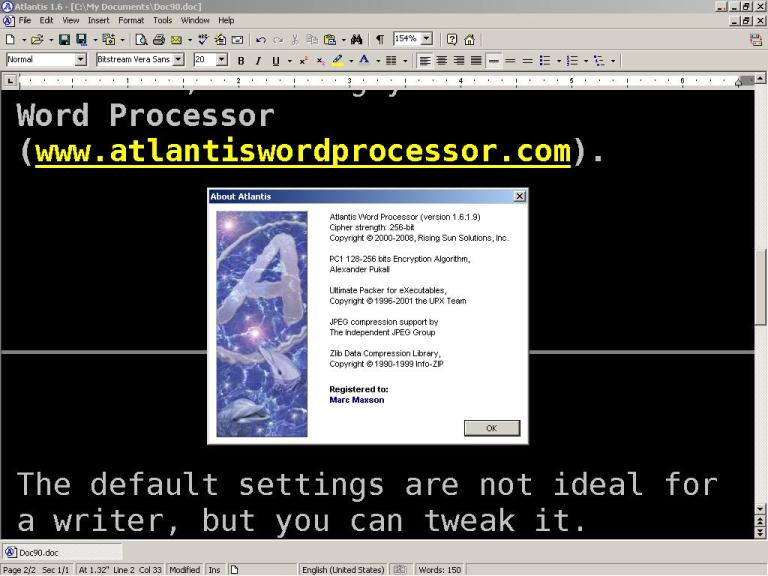 The default settings are not ideal for a writer, but you can tweak it. Here’s how:

First thing after you install Atlantis – go to Tools-Options-Colors and change the background to black and text to a light color. Then, turn off the annoying sound scheme and press F9. Viola! You’re got a full screen wordprocessor that can go 97% of what Word does with screaming-fast finger responsiveness. Atlantis will load any version of MS Word (including docx!), but will only save RTF unless you buy the full version for a mere $20. Latest version requires you to specify that all menus should disappear under Tools-Options-View when you press F9. I’ve written several novels and my PhD thesis largely using Atlantis.

Be sure to change the default settings — black on white, big letters. 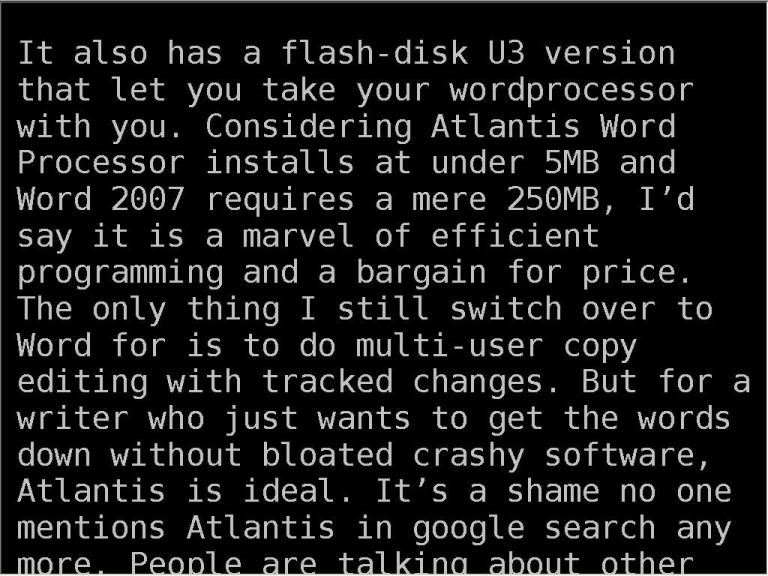 [Atlantis in big-letter full screen writers mode. Viola! Just a bunch of white words on black text that you can save in any format!]

It also has a flash-disk U3 version that let you take your wordprocessor with you. Considering Atlantis Word Processor installs at under 5MB and Word 2007 requires a mere 250MB, I’d say it is a marvel of efficient programming at a bargain price. The only thing I still switch over to Word for is to do multi-user copy editing with tracked changes. But for a writer who just wants to get the words down without bloated crashy software, Atlantis is ideal. It’s a shame no one mentions Atlantis in google search any more. People are talking about other free software like Darkroom, Jdarkroom, and RoughDraft – that do hardly anything at all and yet fail to run as smooth as Atlantis. I want a blank screen, but I’m not willing to forgo compatibility with Word 95/97/2003/2007 for it. Luckily I don’t have to.

I prefer to write my novels with my eyes closed, lying on my back, using a laptop. So Atlantis is really perfect for that. Free yourself to start free writing.

For organizing your novel into a story board, I recommend Trello: Trello for Nanowrimo Storyboards