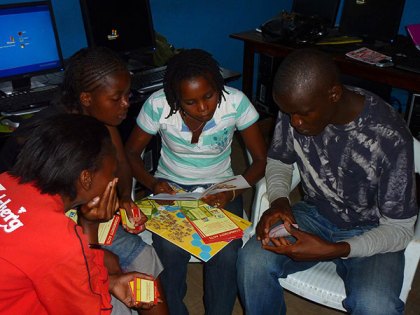 Last month I saw a group of Nairobi slum kids playing a board game with a Kenya slum theme. Each player took on the role of a poverty archetype – the thug, nightclub teen, smuggler, hawker, or student – and had to navigate through the conflicts that emerged to avoid getting shot, pregnant, starved, or HIV. It looked fun and provided people with a laboratory to examine cause and effect.

"Where can I but my own copy?" I asked.
"You can’t." It was a prototype, and I was bummed. I forgot to write down the NGO in the Netherlands that made this Kenyan slum game, so I could beg for a copy and volunteer to play-test more designs.

Last night I brought Reiner Knizia’s High Society auction game in to work to play with GlobalGiving staff. I wanted to explain my ideas for getting more NGOs to succeed in raising money for themselves by using games as a model. Because I love the mechanics but hate the theme, I actually made my own copy of high society called "K street." In this version, each player is a political party who can trade in favors with lobbying groups to throw votes behind the 10 most powerful entities in Washington. The gameplay rules are identical, but the cards are more entertaining. Instead of saying, "I bid 15 million on the yacht," people shout "I’m using FoxNews and AIPAC to buy Dick Cheney!" [I re-Designed this game 3 years ago now.]

If I could design board games for social good on a permanent basis, I would probably quit my job and do that right now. But it is gratifying to have input into a design for a kind of real-world auction game that could raise $60,000 to help 25 young people with bright ideas implement them, and incentivize more cooperation along the way. I feel there’s a huge opportunity for fun and entertainment to drive social change.

Understanding games is important for understanding and modeling human behavior. Patrick Meier of ushahidi fame nodded his head up and down in vigorous ascent when I mentioned that we needed to turn community reporting into something entertaining, like a game, in order for civic society to emerge in African slums. We both want to make it happen, but we need someone like Reiner Knizia or Andy Looney, my two favorite game designers, to help.

Reiner, a Mathematician who spent years at a big international bank before publishing his games, really understands the challenge of making games fun for tough audiences – like children. In an interview he said:

"One good thing is that the kids are not nice to you, they are simply honest. You can tell by watching if they are fascinated with the game. Either they are concentrating on the game or they run off and do something else. You get very good feedback and very good insights. Since I’ve been playing with children, especially small children, I’ve learned a lot about the essence of playing. Of course they also have a great ability to destroy everything. My prototypes usually don’t last very long when I’m playing them with kids (laughs). But that’s part of the play testing as well because then we know what materials we can and can not use."

I’ve tried my own hand at this. To date, I’ve designed 5 games and filled up a designs notebook, but only bothered to play-test 2 of them. It’s an awkward proposition to call up your normal friends and tell them to spend an hour playing a game they might not like and that might even contain a fundamental flaw. But today I’m inspired to turn my GlobalGiving challenge game into a paper version, so we can play test the outcomes repeatedly before doing it with real money.

Other board games for poverty learning: http://www.sambazapeace.org/