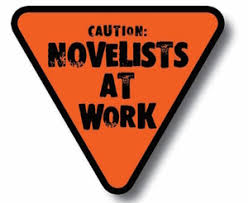 If you’ve met me in person then you’ve heard how transformational I find Nation Novel Writing Month (NaNoWriMo). Each November brings me the promise of another awesome completed novel (and this one I’ll sell), only there are a few challenges along the way. Here are excerpts from some of the best motivational emails Nanowrimo sends out, from their Pep Talk Archive:

The Secret from Author Piers Anthony:
Fictive text doesn’t necessary flow easily. Most of the time it’s more like cutting a highway through a mountain. You just have to keep working with your pick, chipping away at the rock, making slow progress. It may not be pretty at first. Prettiness doesn’t come until later, at the polishing stage, which is outside your month. You just have to get it done by brute force if necessary. So maybe your ongoing story isn’t very original. That’s okay, for this. Just get it done. Originality can be more in the eye of the reader than in any objective assessment.

From John Green (best-selling author):
Way down deep in the dark archives of my hard drive, I have a folder called Follies, which contains an impressive collection of abandoned stories: There’s the zombie apocalypse novel about corn genetics, the sequel, the one about the Kuwaiti American bowling prodigy, the desert island novel, and many more. These stories have only one thing in common: They’re all about 25,000 words. By definition, abandoned novels are more promising than completed ones.

At this point, you’ve probably realized that it’s nearly impossible to write a good book in a month. I’ve been at this a while and have yet to write a book in less than three years. All of us harbor secret hopes that a magnificent novel will tumble out of the sky and appear on our screens, but almost universally, writing is hard, slow, and totally unglamorous. So why finish what you’ve started? Because in two weeks, when you are done, you will be grateful for the experience. Also, you will have learned a lot about writing and humanness and the inestimable value of tilting at windmills.

All joking aside, I know how you feel. Obviously I’ve been there a time or three. Despite my word-count I’m there now. Week two is always fun. These people that used to exist only in your head have their own lives now. On paper, where they can move and act and make plot corrections and insist on changes you aren’t sure you’re okay with. Maybe you’re plot isn’t going where you thought it was. Maybe you’ve scrapped the whole darn thing and started completely over. Maybe you’re about two seconds from dancing round a Veterans Day Bonfire comprised of your laptop, a copy of No Plot No Problem, and whatever else you’ve been using to plot…

You’ve been carrying around a story for a while now and you finally started writing it. Getting started is hard enough, but then you went on to write for a full week, bringing your story to life and making your noveling dream a reality. You’re well on your way, writer, and you have come so far already! Don’t let your inner editor convince you that this isn’t worth your time, or that you should start over, or—even worse—that you should start over some other time. For this novel there is no "later." There is only now.

From published author Aimee Bender:
My friend Phil once said that if I wrote every day what I felt like writing that day, then my writing would not be dutiful. It would have life and interest in it….This approach involves loads of cutting later. But, the payoff is that you will also have lively prose… and start to get a glimpse at what ideas/characters/moments/settings might interest you for the length of a novel.

So, in a nutshell: go where the writing goes. Follow your interesting work. If, on aisle 4 of the grocery store, character 1 starts to open up a peanut butter jar and eat it, and character 2 is so irritated she goes to flirt with a guy on aisle 3, and if this scene was supposed to be their first kiss—well? Maybe it’s just not their first kiss at all. Maybe the guy on aisle 3 will end up being incredibly important. A poet friend of mine, Allyson, once said, "It’s so strange how our mind knows more than we are aware of it knowing." It IS strange. It’s one of the strangest things of all about being human. But it is also your great and unending resource, and your instincts and impulses, your non-plans, your tangents—although messy!—(if you follow this, you will finish the month with a mess of pages! That I promise! But who cares?) have a higher chance of leading you to a deeper, more layered book.

One of the useful things about doing nanowrimo is that it helps you to figure out how to be a better writer. Do you write best in the morning? Or can you only really write by moonlight? Do you prefer typing, dictating to a willing scribe, or scrawling out your story on pieces of paper? Do you need a plot – or do you prefer to just write and see what comes out? These are all important things to discover, and the best way is to try and see what works. So if you are struggling to stay up, why not try something different. Write at a different time of day, in a different place. See what works for you.

From author Kelly Armstrong:
What NaNoWriMo has given you is at least two things you didn’t have on November 1.

The first reward will vary. Maybe you have a first draft you can work on. Or maybe you’ve realized that your idea wasn’t as novel-worthy as you thought. Or maybe, in the course of writing this book, you got an idea for another.

If you’ve been writing for a while, you probably have stories you’ve labored on for months, even years, before realizing the idea wasn’t novel-worthy. To hit that realization in a month frees you up to start something new without lamenting all the time you put into a story that didn’t work.

The second reward is one that every NaNoWriMo participant gets: one full month of writing practice. It’s a rare writer who publishes the first book they wrote—I didn’t.

From a non-linear genius who happens to write books, Tom Robbins:
Dispense with any and all of your old writing teachers, the ones whose ghosts surely will be hovering there, saying such things as, "Adverbs should never be…", or "A novel is supposed to convey…", et cetera. There is, in fact, only one rule in writing fiction: Whatever works, works.

As the great Nelson Algren once said, “Any writer who knows what he’s doing isn’t doing very much.” Most really good fiction is compelled into being. It comes from a kind of uncalculated innocence. You need not have your ending in mind before you commence. Indeed, you need not be certain of exactly what’s going to transpire on page 2. If you know the whole story in advance, your novel is probably dead before you begin it. Give it some room to breathe, to change direction, to surprise you. Writing a novel is not so much a project as a journey, a voyage, an adventure.

It’s a bit like being out of control and totally in charge, simultaneously. If that seems tricky, well, it’s a tricky business. Try it. It’ll drive you crazy. And you’ll love it.

Do you think I haven’t been there? Cheating on your current work-in-progress with a new one is the oldest trick in the book! I have a plastic milk crate crammed full of stories I started and never finished because I cheated on them, then got so enamored of my new story, I never went back to the old one. Over and over and over again.

And that, my friends, is how you never finish a book.

From Author Jonathan Stroud:
If ‘inspiration’ is when the words just flow out, each one falling correctly on the page, I’ve been inspired precisely once in ten years. All the rest of the time, as I’ve been piecing together my seven novels, it’s been a more or less painful effort. You write, you complete a draft in the time you’ve got, you take a rest. Then—later, when you’ve recovered a little—you reread and revise. And so it goes. And little by little the thing that started off as a heap of fragments, a twist of ideas trapped inside your head, begins to take on its own shape and identity, and becomes a living entity, separate from yourself.

From Author Neil Gaiman:
The last novel I wrote (it was ANANSI BOYS, in case you were wondering) when I got three-quarters of the way through I called my agent. I told her how stupid I felt writing something no-one would ever want to read, how thin the characters were, how pointless the plot. I strongly suggested that I was ready to abandon this book and write something else instead, or perhaps I could abandon the book and take up a new life as a landscape gardener, bank-robber, short-order cook or marine biologist. And instead of sympathising or agreeing with me, or blasting me forward with a wave of enthusiasm—or even arguing with me—she simply said, suspiciously cheerfully, "Oh, you’re at that part of the book, are you?"

I was shocked. "You mean I’ve done this before?"

"Oh yes," she said. "You do this every time you write a novel. But so do all my other clients."

I didn’t even get to feel unique in my despair.

So I put down the phone and drove down to the coffee house in which I was writing the book, filled my pen and carried on writing.

Final note ( for this first draft 🙂
Did you notice how by the end of this post I was capitalizing the word Author? This is a strange, magical profession. And like Summer, Fall, or Tuesday, it deserves to go through life with a capital A in front of it.