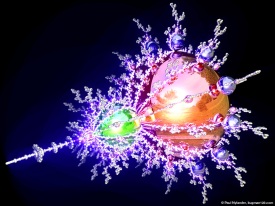 I’m outlining a new college course to teach at Kenyatta University that incorporates everything missing from my own science education (BS, PhD). These are the emerging topics that I believe will form the foundation of scientific fields in the next decade to come:

Briefly, these topics will provide scientists with an understanding of how to deal with real-world non-linear systems, and mechanisms for generating more accurate predictions of future outcomes. Both skills will prepare the next generation of great thinkers to tackle the world’s problems outside of the laboratory. These non-linear methods are drawn from chaos theory, complexity theory, game theory, and behavioral economics, and I will teach by illustrating several examples of each in a real-world setting. Prediction methods include several forms of emergence, fractal math, prediction games, neural networks, and iterative learning systems (feedback loops). Where possible, I will try to demonstrate the interface between each of these concepts and the conventional material in a scientific textbook. We do our students a disservice when we present science and a static and self-contained set of ideas (as most textbooks are written) – and I aim to highlight what we don’t fully understand in the course of teaching one of the core sciences.

Students will acquire some body of knowledge within Biology or Chemistry, but also experience methods first hand that they will one day use to extend that knowledge, innovate as entrepreneurs, and generally solve the world’s problems in some rational systematic way.

Good instruction begins with breaking down the walls between the classroom and daily life. Students would attend regular lectures, but also work in groups to identify and attempt to solve problems in the real world that relate to classroom concepts. One of every 2-3 lectures would be devoted to the “special topics” in this complexity syllabus. I will use real-time SMS polling during lectures to enable student feedback to be aggregated and visualized on the screen during lectures. This interactive, technology-aided approach should keep them engaged, and allow us to practice some of the techniques of crowd-sourcing, emergence, and prediction games that I am teaching.

Within each subject, my goal is to:

Employers and Entrepreneurs value these capacities above all others:

Where does this fit in science overall?

Current Science courses split the natural world into subdisciplines based mostly on how each approaches research:

There are many subdivisions within these three sciences, but they employ similar methods to one of these three core sciences. These concepts overlap with each of the core sciences and with some math courses. There is no logical place for it to fit, but it reflects aspects of nature that are not covered in these areas.