DAY 5: Jesus’ followers flee when he is arrested

Continuing with my series on what the passion narrative can teach us about international development, I pick up the story on the night Jesus was arrested in the garden, praying to God for guidance. He knew he was going to suffer and that even after three years together, his friends and followers would not really have the mettle to stand by him in his moment of need:

He came to the place called Gethsem’ane and said to them, “Pray that you may not enter into temptation.” And he withdrew from them about a stone’s throw, and knelt down and prayed,  “Father, if thou art willing, remove this cup from me; nevertheless let not my will, but thine, be done.”

Then he returned to find them sleeping, and he said to Peter, “Simon, are you asleep? Could you not watch one hour? Watch and pray that you may not enter into temptation; the spirit indeed is willing, but the flesh is weak.”

Soon a rabble of priests and soldiers showed up with swords to take Jesus away. Judas was among them and pointed him out. His disciples ran away and Jesus was left to face his tormentors alone. 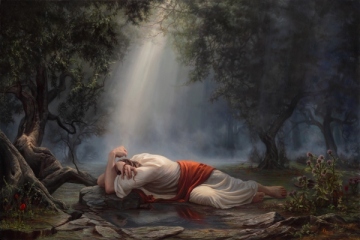 In 2008, allegations of fraud in the Kenyan election caused much of the country to erupt into violence. And like many crises before it and some since, international funders did not stand by their grantees in a time of need but pulled out and abandoned them. They stopped disbursements of money and evacuated their aid workers (who were clearly not personally willing to become aid servants). After all, why should anyone be flexible if we are going to seek impact? Isn’t the likelyhood of fraud much higher under these circumstances?

Yes, you are going to lose money to fraud during a time when Kenya is burning and people are being hacked to death with machetes. And yes, you are going to see the money you do send achieve little (the dreaded ‘inefficiency’ problem). I point this out because this is was the narrative guiding organizations’ decisions on how to intervene. Instead, we should be looking at crises from the community’s point of view, from the aid servant’s point of view. Frankly, all of these concerns (fraud, efficiency, mission drift, risk mitigation, and aid worker safety) are all about the aid organization itself, and NOT about the people.

Once again, international development proves it is the disciple that runs away and not the savior at all.

In contrast to large, bureaucratic organizations with a rigid mission, the community organizations in Kenya were forced to adjust to the situation and immediately act to save their towns from burning. They were flexible and committed to intervening in whatever capacity they could, without regard to personal safety or the risks involved. They had no choice. These were Kenyan organizations run by Kenyans who could not and would not abandon their homes.

So when GlobalGiving took a look at the situation, we didn’t evaluate our own risks, we evaluated whether we could help these organizations who had committed themselves to heroic deeds. We saw a clear reason for continuing to support them with our fundraising platform. In fact, we accelerated our disbursements and helped them raise awareness of the situation with the public worldwide. This is what big funding agencies should have done, but they lack the agility to design an engagement strategy in the 12-hour window that it takes GlobalGiving.

This is what the world needs. Less rigid grantmaking instutitions thinking about their own impact and working on a 3 year cycle, and more flexible, listening, helper organizations who are able to aid others immediately when the need is obvious.

Where were these guys when Kenya was burning in 2008?

Helping, to be sure – but months later.

And where were they during the Arab spring of 2011?

Helping, but only after internal debates about how these actions would affect themselves. They must start the debate about how best they can help others.

At this moment, Facebook can manage 900 million status updates every day. Google can manage a billion searches every day. GlobalGiving can orchestrate an immediate disaster relief campaign in 12 hours and get the money disbursed on the ground to do work in one week (as we did with Japan’s earthquake). Why, then, are these organizations becoming slower and more rigid in their mission focus when the world changes faster every day?

People inherently want to do good, will go to great lengths to help others, but systems are soulless and temper this do-goodness. We need new systems, especially systems that are democratic and put the power in the hands of more people (who are inclined to not abandon others), not fewer people.

The more we focus on ourselves as organizations with power and wealth seeking recognition for our impact, the more we leave community organizations to fend for themselves when they need us most. Our self-centeredness leads us to abandon other organizations.

A change of heart

Jesus’ teachings do offer an alternative that would allow organizations to have a greater impact in the world. It begins by accepting that quantifying our impact is a distraction. We should still monitor and measure, but we should be asking “is life getting better for the people in the community?” and not “are we responsible for the changes we see in the community?” The first part can be measured, and should be measured for the whole community – not just the parts that you know the organization reached. Whereas the second question requires knowledge of all the players who contributed to the change, then assigning attribution to each player. This is fraught with errors and entirely subjective. We’d like to know this, but I’m convinced we lack the capacity to know it. So instead this is what we can know and use to our benefit as a proxy for atribution:

If Jesus was working in international development, he would point the finger at many of the big aid organizations who fail on these counts, and raise up the little organizations who quietly succeed.
But before you think of some mega aid organization that isn’t respected locally, isn’t curious, isn’t a good listener, isn’t willing to change, isn’t hungry for excellence, and forever mitigates it’s own risks at the expense of others – first think critically about the organization you work for.
Because every organization has the capacity for redemption. Especially yours.

5 thoughts on “Abandoning organizations on a quest for impact”