It has been 4 years since Kenya erupted in post election violence. And starting in 2011, we’ve been collecting stories about everything, including PEV. Here is a timeline of the stories going back several years (even though we collected them later), and how storytellers felt about their stories:

The color of the dots (generally red on top and green on the bottom) is consistent with three other questions we asked storytellers that allow us to separate positive / success stories from negative / need+problem+failure stories. Taking just the 177 negative stories and visualizing them with wordle gives you this:

And likewise, here are the words from 256 positive stories about post election violence: 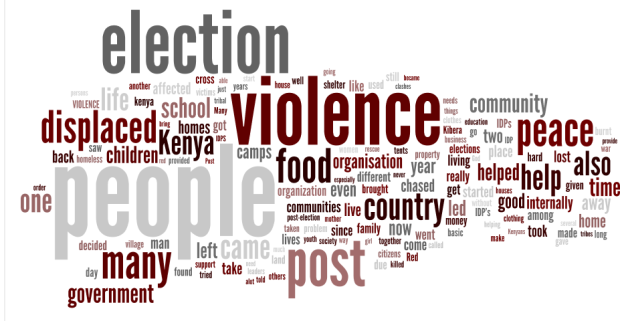 Not very clear as to the difference, eh? Well, here is a different approach, using a text parsing tool I call differential wordles:

Then you take out the peace making themes, what remains is very focused on women, food, and camps. Red Cross is also prominent. This PEV-peace picture is consistent with a lot of stories I read where girls are begging to get to go to school, so they can avoid abuse, rape, molestation, and other gender violence that plagues IDP camps.

Who / what projects get talked about?

This required reading the actual stories, as I can find no reliable way to extract names of organizations and projects and aims from stories. But it is not too difficult. It only took about 20 minutes to generate this list. The most often mentioned stuff was provision of tents and food by big agencies, as told by 3rd party observers.

What isn’t talked about in post election violence stories?

There are practically no stories about international organizations working to provide economic opportunity to internally displaced persons (IDPs). This is in contrast with the other kinds of help provided by the Kenyan government, local NGOs, churches, and individuals:

(Purple is NONE – which dominates these stories. None is a mixture of stories where no organization was identified by the storyteller, or it is there but we didn’t catch it and they weren’t explicit about it in the follow up survey questions.)

International NGOs are no being talked about as much anymore, and mostly in a negative context in more recent stories.

Local NGOs in Kenyan continue to be mentioned, and generally in a positive way around solutions and success:

The Kenyan Government seems to be largely absent in more recent stories, but a mixture of good and bad.

Individuals continue to carry the load, especially in recent stories, where they represent an increasing fraction of all stories about post election violence. However, not all stories are positive.

This analysis came from only 581 stories. In 2010 in our pilot study, we collected way more stories about post election violence, as a relative fraction of the total 2530 from that year. However, they would be difficult to import into SenseMaker(R) used here to draw the diamond plots, and licensed from http://www.Cognitive-Edge.com, so I didn’t show that data.

One thought on “Post election violence stories from Kenya (2012 edition)”