Here are two more examples of the branching ideas found within all stories and just those related to GlobalGiving’s partners, at varying degrees of depth:

All 39,470 stories’ ideas branching out (click to see full version) 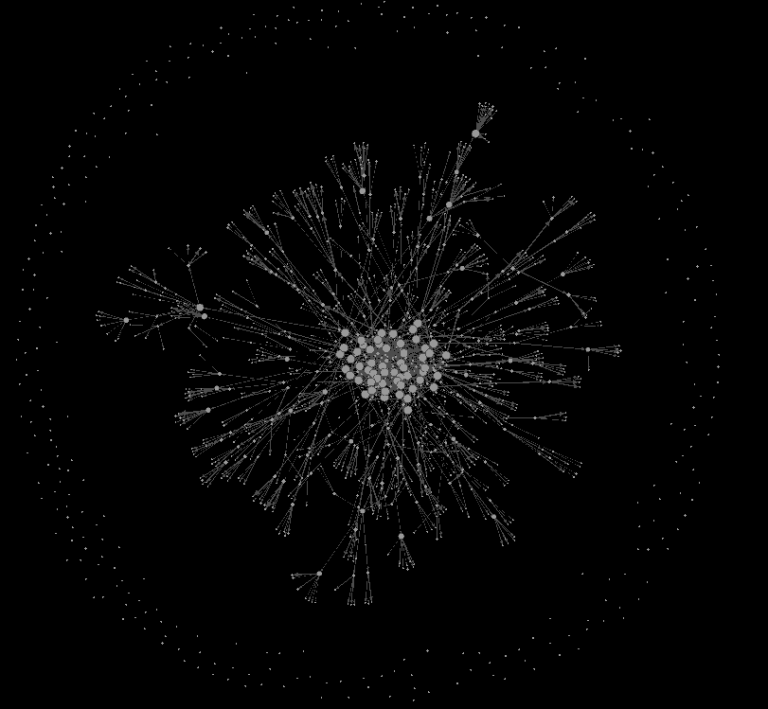 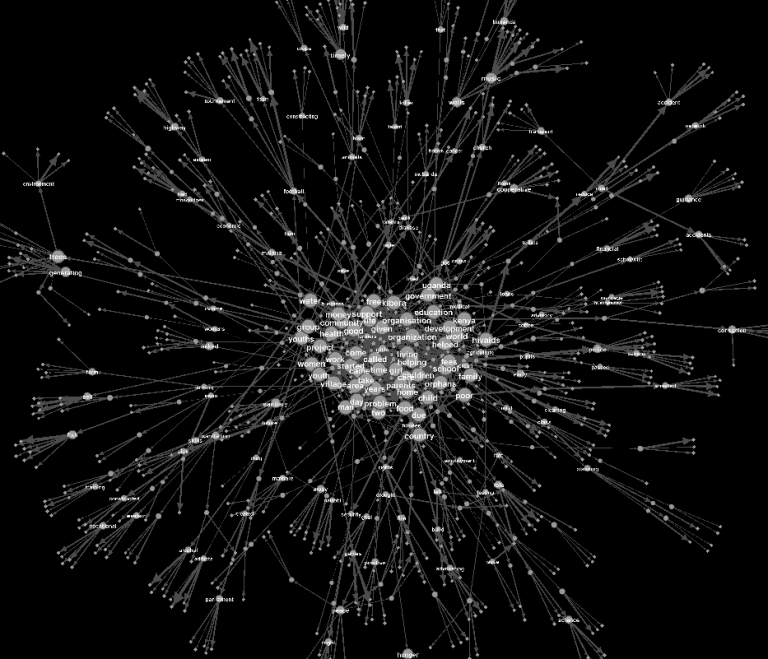 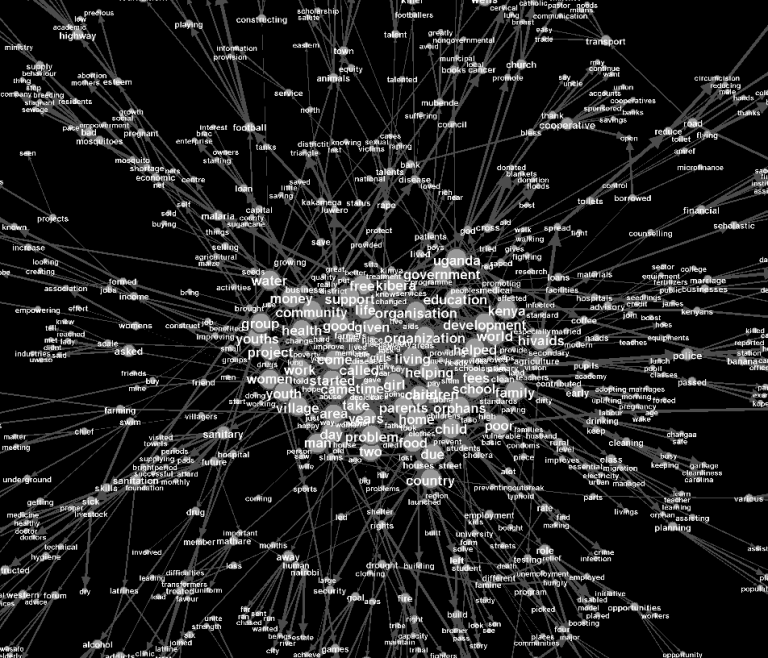 As this level of zoom, I’ve manually added some coloring of concept-related branches:

Important note! When I color a word, such as farming, to associate it with trees and agriculture or HIV, any adjacent words in the map also get colored by Gephi. 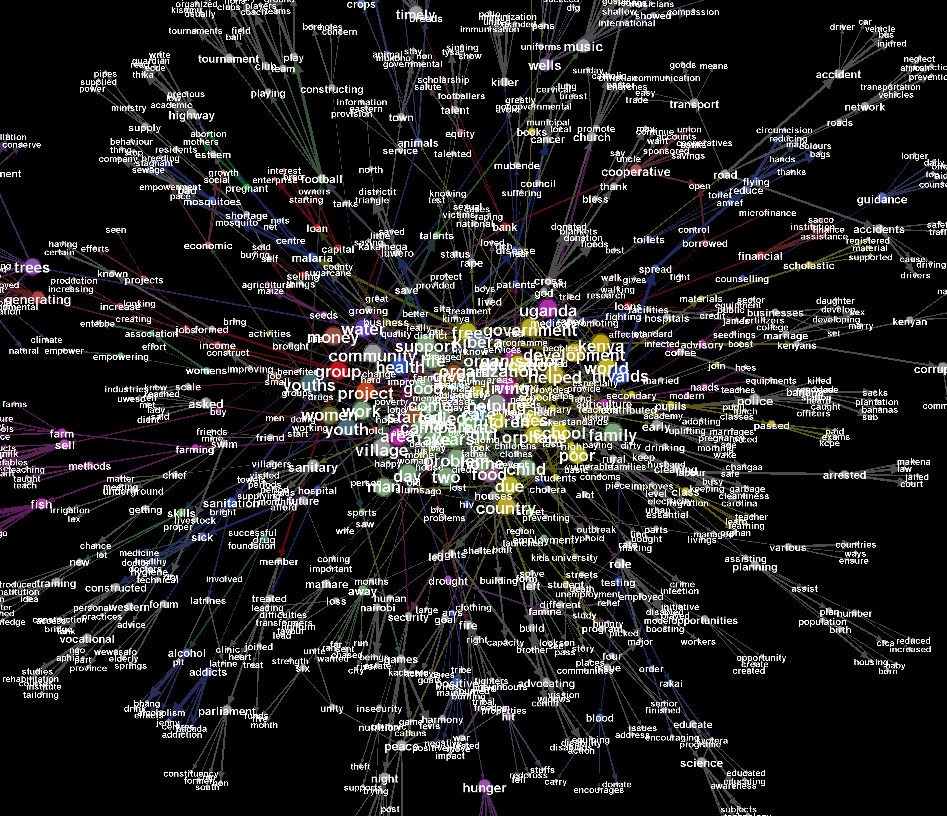 The core blob of this giant set of stories is primarily people and education centered, based on colors. 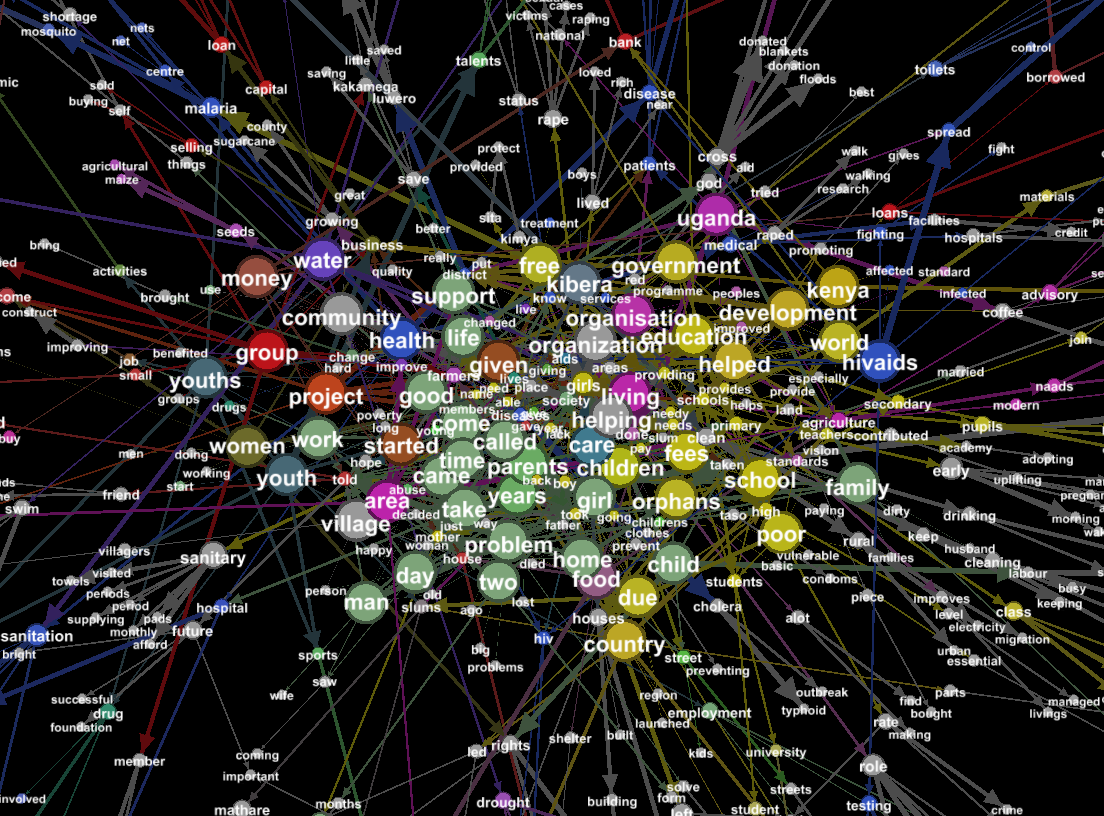 This is not an exact list of stories, since the storytellers don’t exactly know who did what, when, and with whom, in their own community. But here are the stories we THINK are related to our partners, at varying levels of branching depth. (I can generate a simplified map or an incredibly branchy map, and both are useful):

Word/concept maps of the messiest type of story

Below is a map of stories where many of the elements are ‘mixed’ and not clear: Mixture of need, problem, and solution; mixture of social relations, physical well-being, and economic opportunity, and a mixture of success and failure – in the storyteller’s point of view:

I didn’t try to color-code nodes by whether they are related to behavior change, but I would be willing to bet many of these stories are about intractable ‘behavior change’ problems in development.  Here is a file containing all of these mixed stories so you can decide for yourself :

And if you want to download the free and open-source Gephi viz tool and play with these files, here they are. (Change the extension to .gephi if it downloads as a .doc file instead):

Part of the definition of a ‘chaotic system’ is that it is extremely sensitive to initial conditions. In these examples, the structure of the whole map is quite different depending on two parameters:

Eventually, with lots more time, I’d like to systematically measure how different all possible maps appear relative to each other as a function of altering branchiness and minimum word frequency. I think that map diversity provides us a proxy measure for the “messiness” or complexity of the underlying concepts described. Unfortunately, that isn’t the purpose of this project; the goal this project is to find a cheap and effective way to provide feedback to hundreds of partner organizations, so that the field of international development can operate more effectively. But it is food for thought…

2 thoughts on “More examples of word-trees”