One of the questions I get asked most about the GlobalGiving storytelling project is how will we use this to do program-level evaluations for ourselves and our partner organizations?

For two years we’ve tried a lot of tools for doing this. Here is one more that I built, and I think it has promise. These illustrations are computer generated maps of the overlap between how an organization describes itself (to donors) and how storytellers describe the organization or some relevant social problem.

Finally! Something that provides a lot of detail on the “WHAT” aspect of the 6 questions journalists care about (who, what, where, why, when, and how), and evaluators should also care about.

This map is gray because I only have one source of information about them. ANPPCAN has not joined GlobalGiving, so I don’t have a track record of how the org describes itself to contrast with the 27 stories that we collected about them. From their website, I can quickly see that they have an inflated self-image, using the phrase “pan-African network” when all 27 stories about them came from Makono or Jinja, Uganda.

ADDING COLOR WITH AN ALGORITHM

In the maps below, each node (or word) has a color. Red words come from the organization’s mission, description, projects, and project updates on GlobalGiving. Blue words come entirely from related stories. Shades of purple overlap both groups to various degrees. 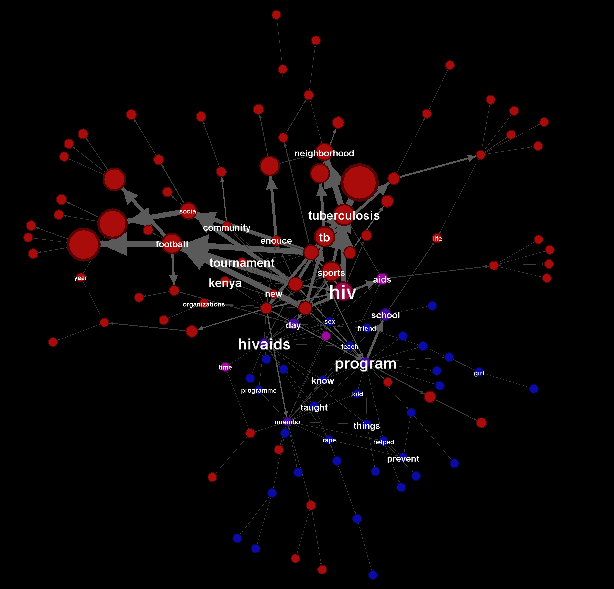 I assume that good organizations communicate their purpose clearly. This map makes it quite clear that their donor communications have little in common with their project beneficiary stories. This org (VAP) went out and collected stories about their MREMBO project themselves, and were pleased to find out just exactly what adolescent girls were or were not learning after participation. Here’s more detail on that: 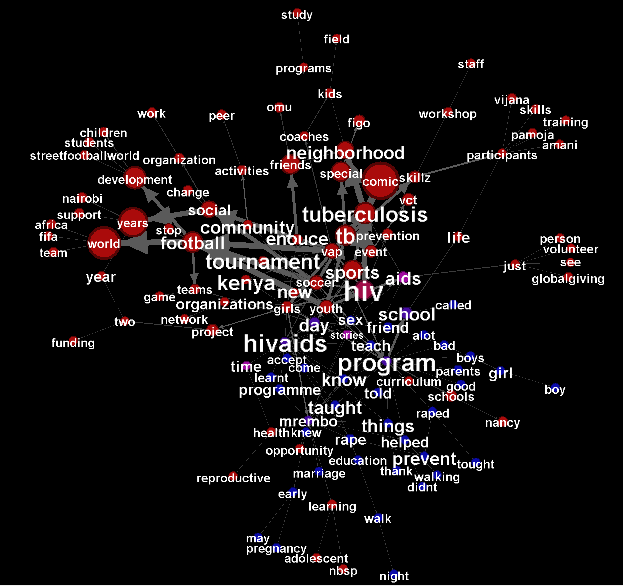 What stands out is that there are very few purple nodes. What overlaps here are the words aids, time, and program. The rest of the map shows that VAP can do more to describe their projects to donors from the perspective of the girls who are participating. There is still a lot more ‘drilling down’ one can do.

Since the goal of the mrembo program was to teach girls about female adolescent issues, we can now compare stories from mrembo girls to stories from all other storytellers that discuss these issues (early pregnancy, rape, HIV, and abuse):

Stories that mention ‘mrembo’ vs stories that include the words ‘rape’ and ‘prevent’: 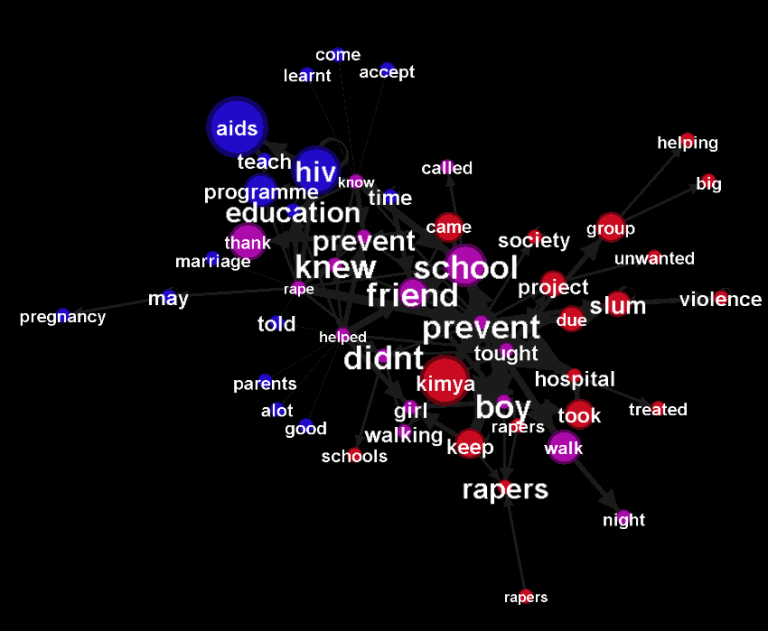 NOTE: Mrembo stories are in blue. Rape + prevent stories from everywhere else are in red. Overlapping words are pink/purple.

So, in your opinion, is there enough overlap between these two sets of stories?

I would say yes. Many of the issues they intended to cover are mentioned in blue or purple, and most of the red words are not relevant. This does reveal that the Mrembo project could do more to talk about violence, and treatment (for rape or assault?). It also reveals that people outside of the mrembo project fail to make the association between HIV/AIDS and rape. Pregnancy and marriage are also program-focus ideas.

What about mrembo stories vs. rape, marriage, or unwanted pregnancy stories? 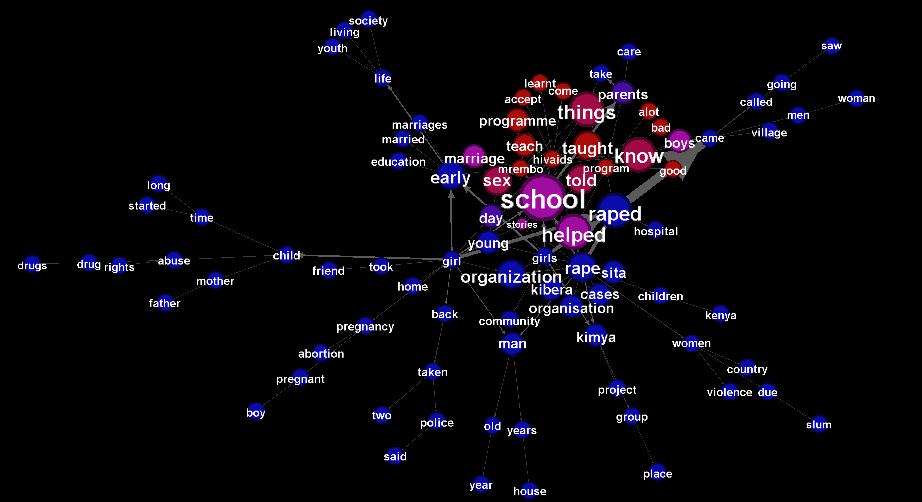 This map suffers from an order of magnitude difference in sample sizes (61 mrembo stories compared with 922 stories about rape, ‘early marriage’, or pregnancy). This sample size difference means that we can expect blue nodes to remain blue. Anything purple has really been emphasized by the mrembo stories.

What Nancy, the project manager, can do with this map is still get a clear picture of what related issues are lurking out there that can be addressed in future after-school life skills classes. Notice how child abuse emerges as a related issue.

And of course, there is another useful benchmark – another organization was running an anti-rape program targeting men. With hundreds of stories about Sita Kimya, you can do a head-to-head comparison: 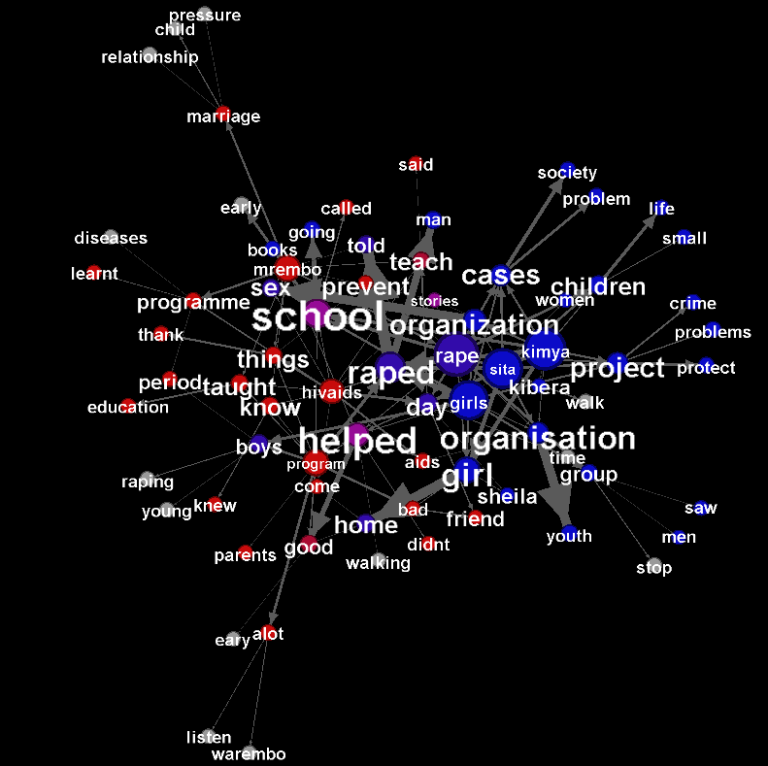 Because we have dozens of meta-data elements tied to these stories, we can apply any filter we want. In this case, I’ve only included stories told by girls that mention ‘mrembo’ (beautiful in swahili) project in red, compared with ‘Sita Kimya’ (I will not be silent!) stories from men in blue. As with all my other tools, the lack of connection between rape and HIV or marriage continues to be obvious among the hundreds of Sita Kimya stories from men.

We have over 1000 stories about TYSA or Kitale (the town where they are based). This map contrasts TYSA (how the organization’s informs donors via GlobalGiving) with related local stories : 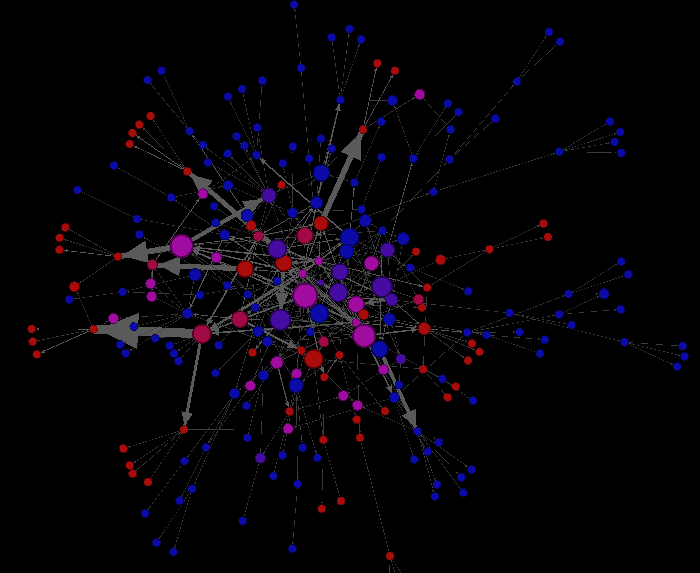 Without the word labels, it’s pretty clear that the overlap is spread out more evenly for TYSA than for VAP. When you add the labels, you can see that TYSA overlaps with many of the key local issues: 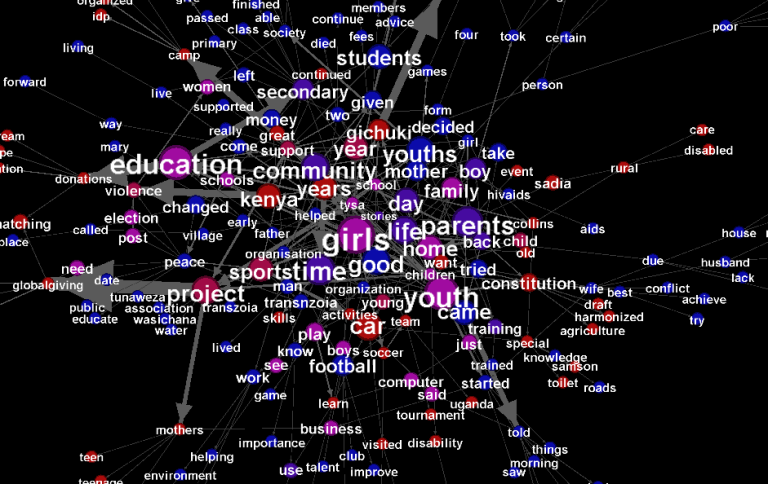 I’ve followed the work of TYSA for several years (I admit, I’m a donor.) and yet I just didn’t realize how focused TYSA has become on girls. I knew that education and youth were pillars of their mission, but they are very clearly targeting girls, family, parents via sports programs.

TYSA is the image of a true community based organization.

But wait! There’s more. On the periphery we can see distinct branches of red and blue, representing community efforts TYSA has tried and community focal points that TYSA has never tried to address: 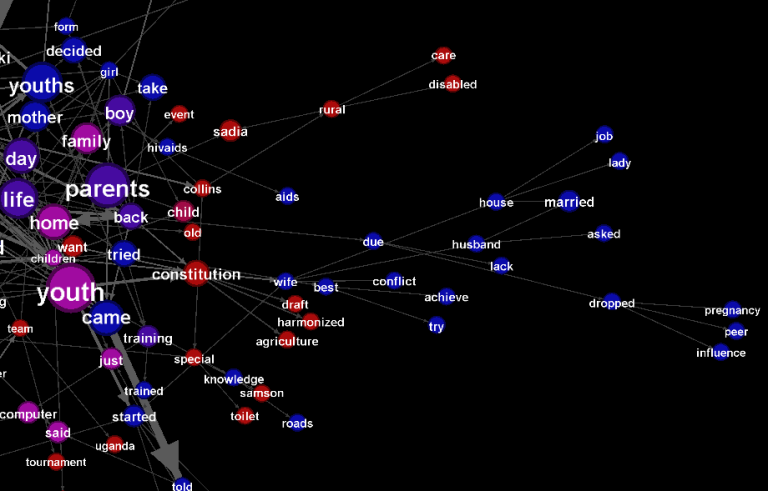 In 2010 TYSA made an effort to start a community awareness conversation about the Kenyan constitution. Their education effort appears in red, but did not leave a lasting impression on the storytellers. In contrast, these storytellers are focused on HIV/AIDS, marriage, husband, wife, pregnancy, and dropping (out of school). Training is talked about in stories more than TYSA mentions on their project or reports to donors. 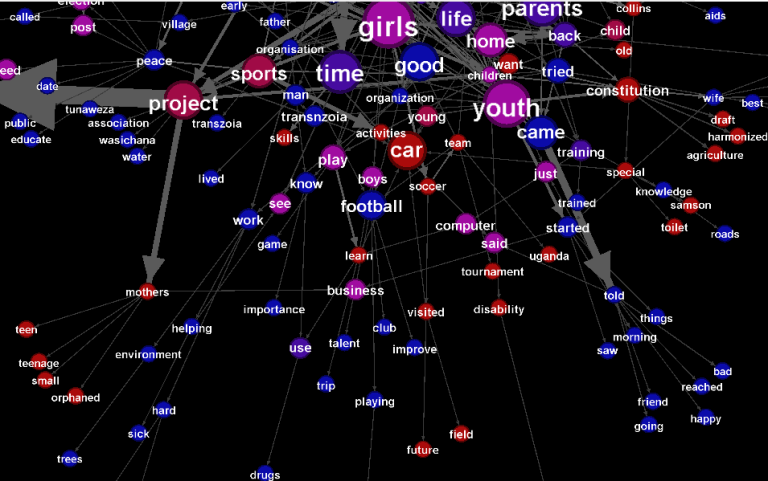 TYSA: mentions “teen mothers” and community mentions “pregnancy”. Community also talks about Wasichana Tunzaweza – a “Yes Girls We Can” campaign that resonated locally but was not described in the same ways to donors. 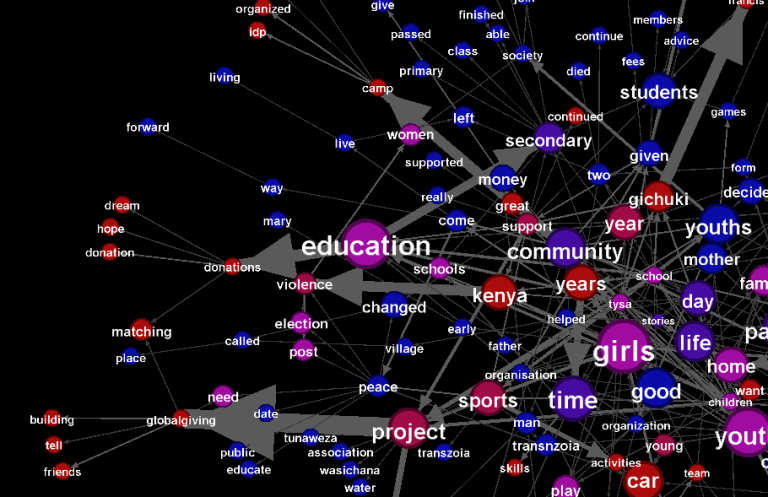 This part shows that education remains a project focus strongly aligned with community stories. Post election violence and peace are also a part of the picture. Clearly, TYSA tackles a wide variety of issues, and many of these are reflected in stories. These stories included all of the region, and not just those that mentioned TYSA, and yet the overlap is strong.

I admit I’m not familiar with this organization, but they were on the GlobalGiving homepage today, so I analyzed them against stories that mention them or aids or orphans (literally more than 7000 stories): 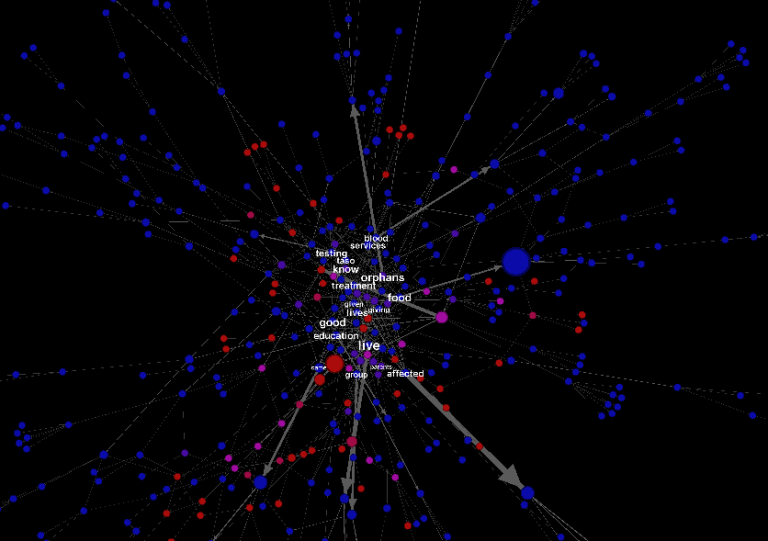 The number of overlapping (purple nodes) is less than for TYSA, but it is there. 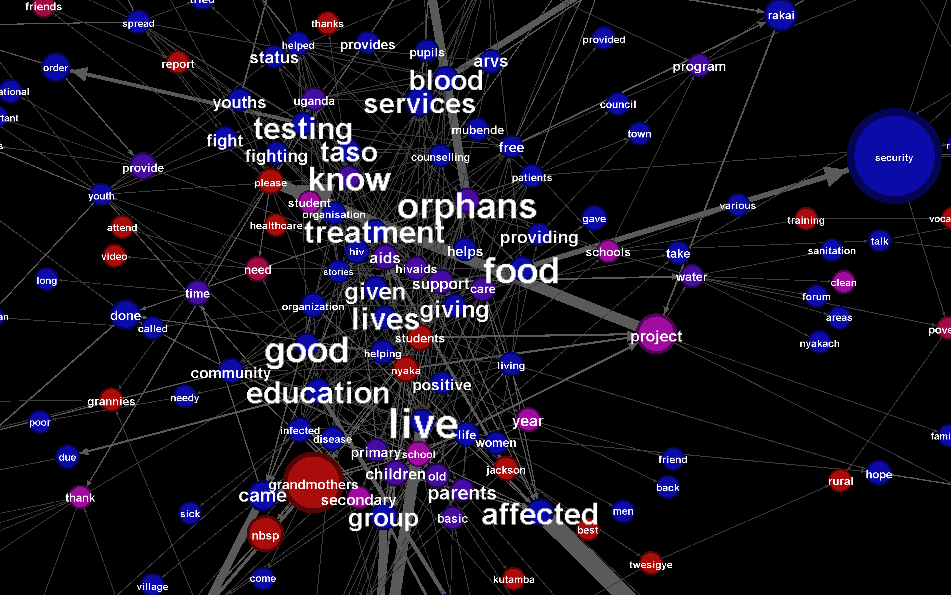 From the center of this map, I conclude that Nyaka Aids Orphans Project focuses on secondary school, student needs, but also clean water. They do not address security, which appears to be a major concern for storytellers that mention HIV/AIDS or orphans. A more detailed analysis would break the reference stories down to just the town where this organization operates, and I would also meet with the org and encourage them to collect a bunch of stories. In that case, I’d want each storyteller to collect TWO stories. One can be about this project, but the other should be about anything else happening, so that a map like this would better reflect community priorities alongside the organization’s meaning to that community.