Here is the evidence, for the absence of a relationship:

Not even if you dropped the top tax rate from 90% to 28%, would you spur growth with lower tax rates.

You’ll notice a growth spike in 1984 after lowering taxes in 1981, but also see an equal decrease in growth in 1991 following an even larger tax cut in 1987. Growth didn’t change either way in 1964, the biggest tax cut of them all.

Cutting capital gains taxes has no affect on real investment.

That straight blue line going up and to the right is your 401K retirement plan and government pension investments, which are on autopilot and drive the market in spite of capital gains taxes. Government “trickle down” wins; Mythical job Creators lost this round. In the 1930s the government started playing with social security and retirement plans – and the line has gone up ever since.

See that flattening blue line over the last decade? That is the effect of governments and corporations trying to avoid investing in pensions. The market suffered and remains unstable so long as we are not investing to pay off future debts.

In a time period of decreasing taxes, big business is growing and small businesses are shrinking as a share of our economy. 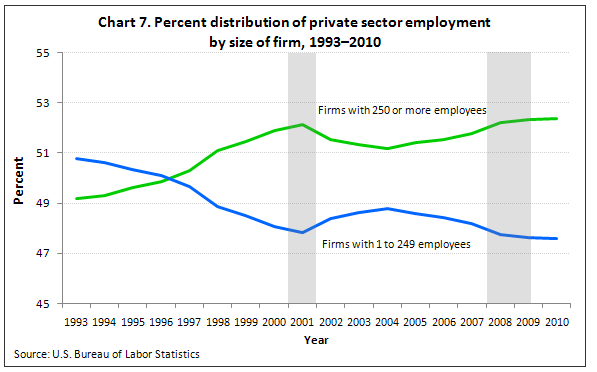 Corporate, personal, and investment taxes are at historical lows.

For context on what macro trends are really affecting our global economy, read this post:

Myth of job creators #4: Small businesses and what really threatens them (hint: it’s not taxes)

4 thoughts on “Lowering taxes does not stimulate growth, jobs, investment, or GDP”