A particle physics textbook I once enjoyed reading (And just for the fun of it — I found it in the public library in Gambia during Peace Corps!) once explained reality as this:

Reality is that which all of us share in common.

Well, nearly all of us. The following infographics present a jarring discontinuity between how many Americans see their own country and how the rest of the world sees America.

Side note: I just had a de ja vu. I saw myself posting this blog in dream about three weeks ago. Suck on that, science! I am a scientist that regularly has de ja vus. I don’t deny them just because I don’t understand them. To observe is scientific; to reject facts because they are messy is fanaticism. Science is not yet all-knowing, and America is not factually the greatest nation on Earth. Here’s why… 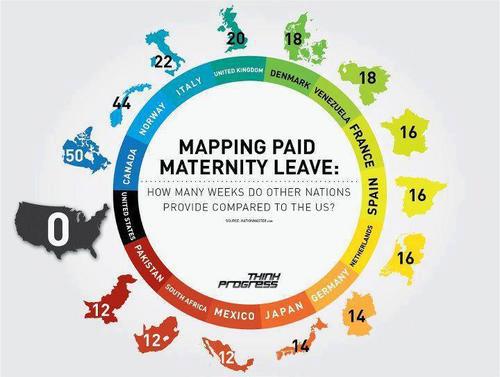 No, these 15 countries are not an anomaly. In fact, every country on Earth but 5 require some maternity leave. (Source: wikipedia) 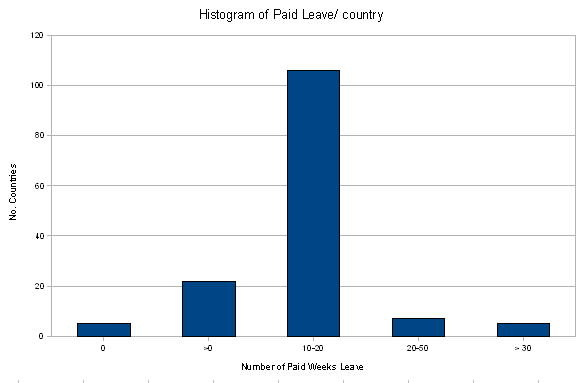 And most importantly to my thesis in this post, the perception of American men is that there is no problem… 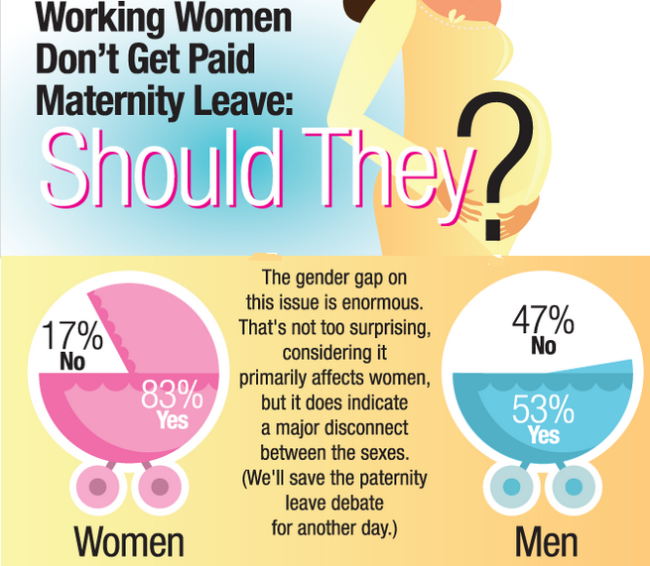 USA Healthcare is the most inefficient system in the industrialized world. We spend more and get less. And if you’re under 50, it is even worse. Source: Profit Is A Barrier: US Comes Last In Healthcare 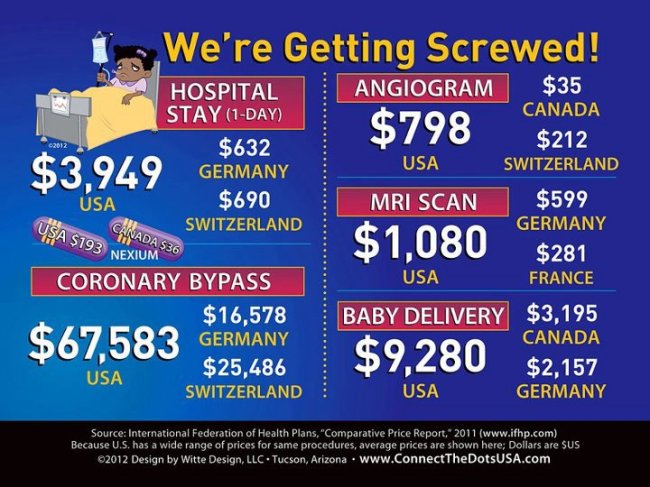 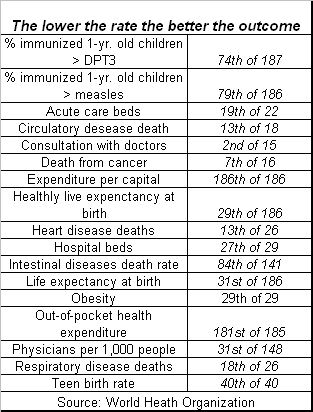 Last in obesity, nearly last in costs, last in teen births, but almost #1 in time spent talking to doctors. 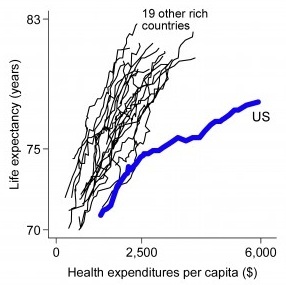 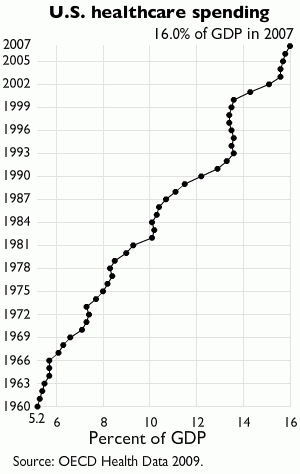 And for the kicker,  most Americans love our last-place system even more than other people love their better-performing healthcare systems. Reality has become detached from fact: 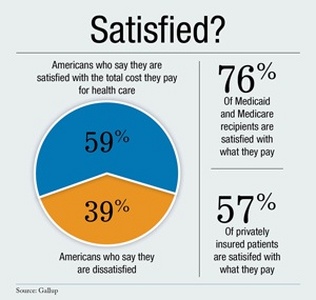 It all depends on which narrow “frustration” questions you ask, and believe me, there are plenty of people paid to distort our reality…. (remember we spend more time seeing doctors than people around the world but end up remaining sicker. Canada wins on “respect” and “affordability” and actual health outcomes. Perhaps 50 weeks of paid maternity leave helps too.) 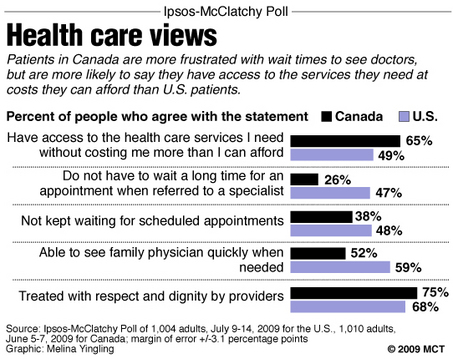 And while we don’t trust our legislators to improve our failed system, nobody else does either. Somehow, all these other countries still manage to deliver better health outcomes. 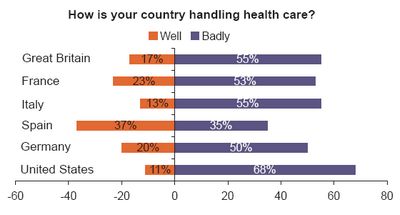 And compared with the level of government distrust elsewhere, Democrats are actually more supportive of government-mandated health reform than are people anywhere else. Did you know that? Or was your reality distorted by the absence of facts? 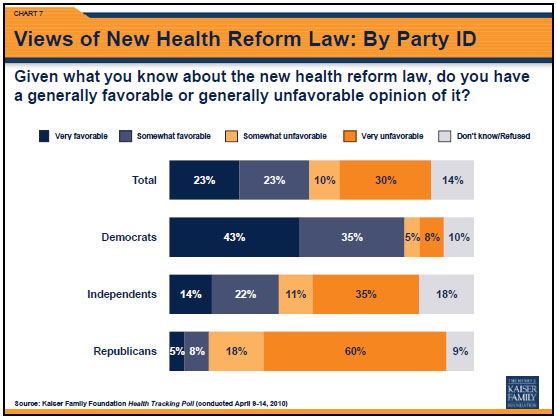 (That’s science, technology, engineering, and math – you know, the stuff that makes your life comfortable though you seem to have forgotten that it takes intellectual discipline to sustain a life filled with such comforts.) 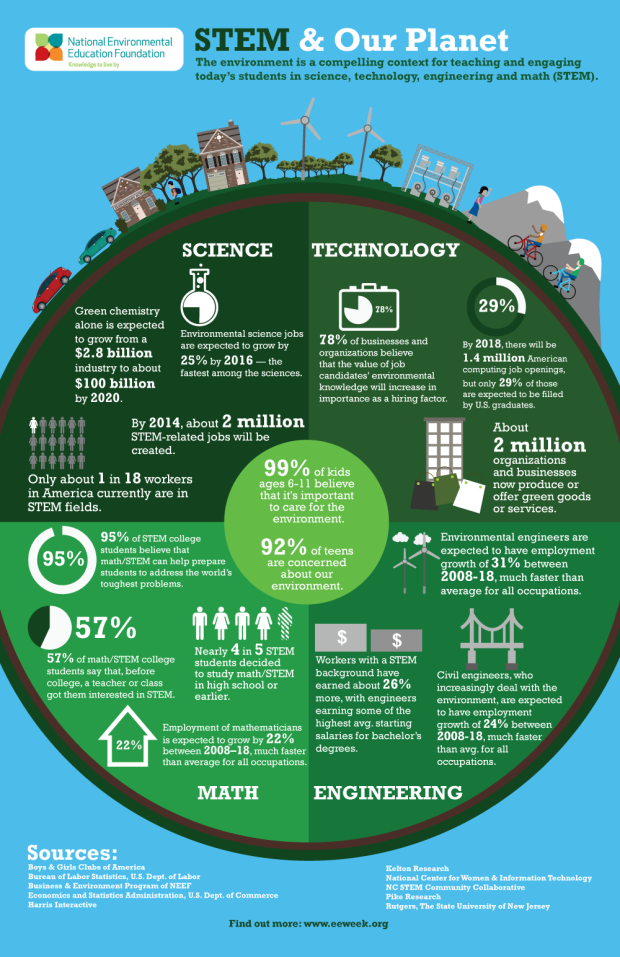 This infographic points out the amazing opportunity that government STEM investments will yield in coming decades. And clearly, America has been doing better in STEM than in healthcare or maternity leave, but we still rank 18th, not #1. 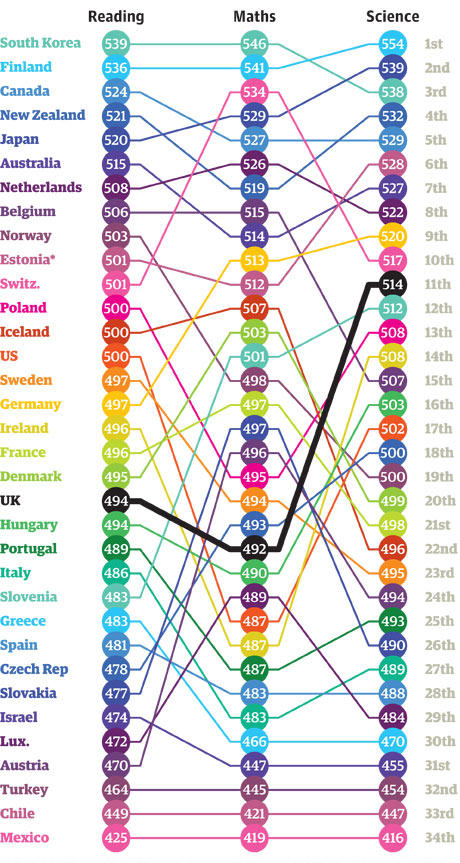 I looked for half an hour for an infographic here, and couldn’t find one. It seems that we’ve been lied to about this. We were always an average country in math and science, according to Mother Jones: 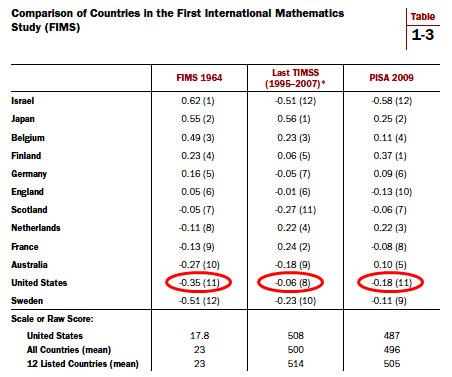 Those negative numbers circled in red are how many standard deviations below the mean most Americans performed. We’re better than in 1964, but still below average.

The myth that we’re #1 in STEM is partly based on USA spending more on our education than anyone else. We have always invested more of our GDP into science research than any other country. Some of this research is bleed-over from our military industrial complex. We do, however, lead the world in educating foreigners. Many of these people return home and spread America’s ideals and philosophy about investing in the future through education:

And like maternity leave and healthcare, Americans are satisfied with the quality of our science education, despite actually being average.  In a 2006 survey only 48% of parents were NOT satisfied with their kids’ science education, compared to 32% in 2005. Only 25% of students think lack of emphasis on science and math is a problem for their future.

Only a quarter of kids think we lag behind in science and math.

In similar polling, half of parents are satisfied with education, but notice that the only thing that moves parents’ opinions is debate about legislation (No Child Left Behind Debate in 2000). The actual changes to education in subsequent years left no mark on opinion polls, because parents are not making opinions based on performance:

Our perception of the future is much more positive than our actual performance. And though I too believe we’ll remain #1 in science output in the world, it has much more to do with being the easiest place to find science grant funding, and not because our students are the best prepared: 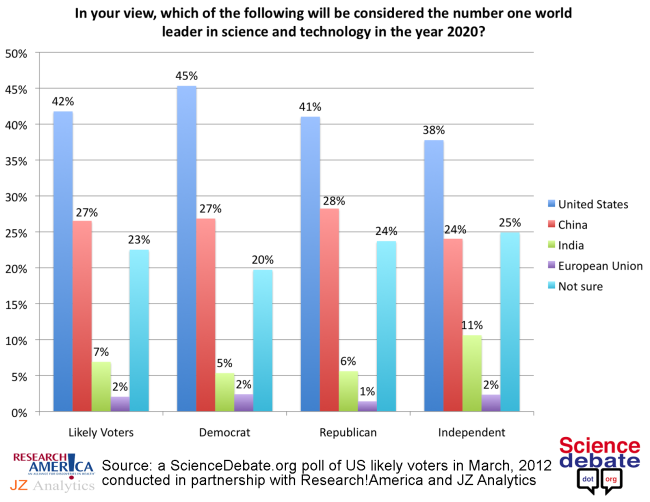 After all, when asked the same question about USA healthcare, we are just as positive about ourselves. We seem to think we’ll become or remain #1 at everything. 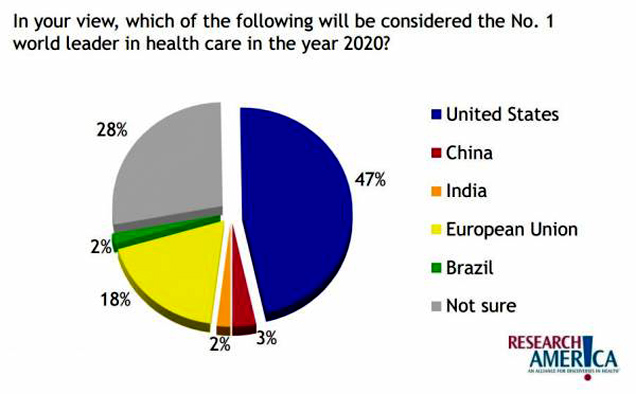 Funny how 47% of Americans believe we will always be #1. That number 47 keeps coming up.

About half of those who benefit from all these social programs don’t believe they have ever been the beneficiary of any socialist government programs (and presumably oppose them):

Again,  a majority of Americans hold an opinion that is contradicted by the facts. Source: Social Reform Issues by Suzanne Mettler

You probably expected this. We have a lot of guns and a lot of gun deaths, but very low support for gun control. 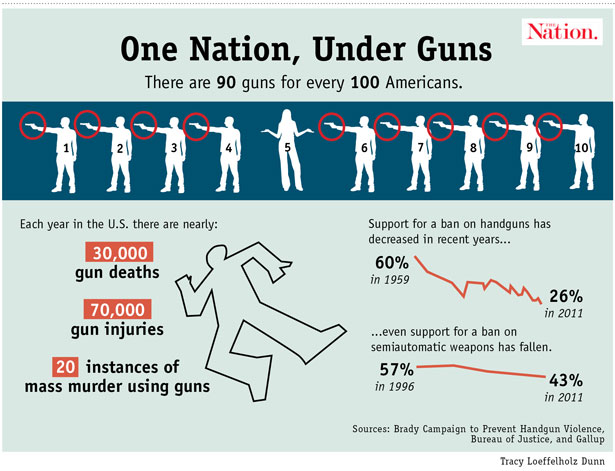 Did I mention we have a LOT of guns in America? 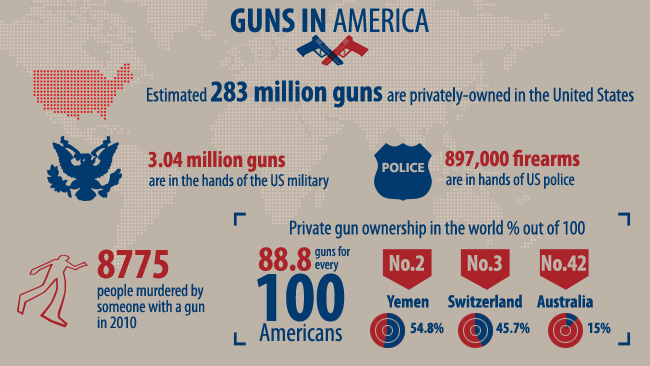 And there never was an assault weapons ban in America in 1994. Hundreds of models were exempted and there was never a gun buy back program, such as was used in Libera and Sierra Leone to get guns off the streets (successfully). I believe all existing assault weapons were allowed to remain in circulation (but the folks at the criminaljusticedegreeschools.com advocacy group are checking this fact for me): 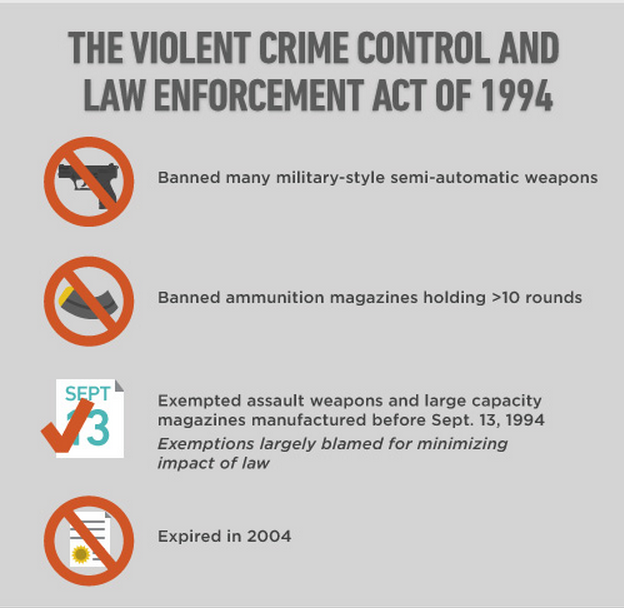 So any arguments for or against gun control that are based on the 1994 law are pretty useless. It is better to compare ourselves to the rest of the world, and to ourselves: 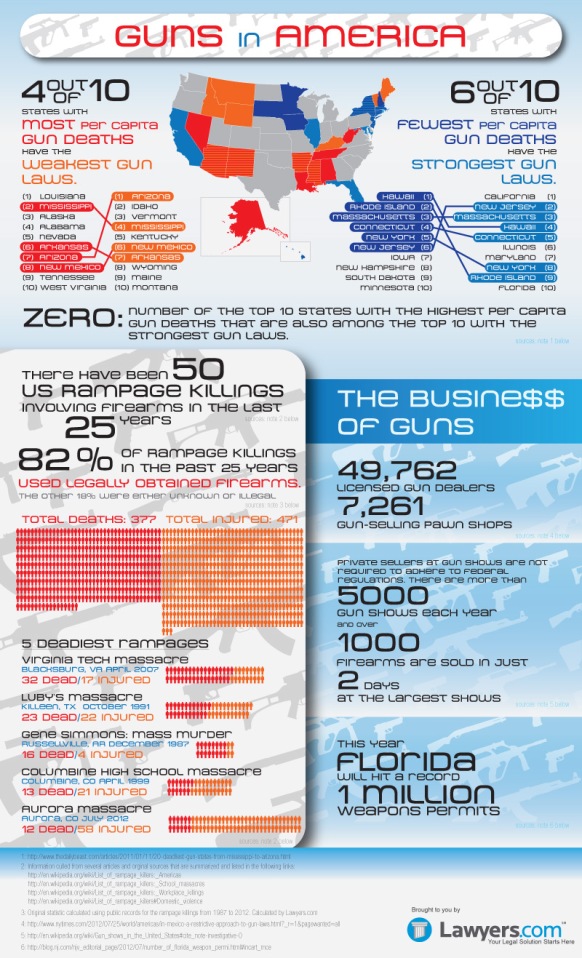 After posting this blog an advocacy group emailed me and requested that I include their infographic about what kinds of guns are assault weapons, including the weapon used in Newton, CT in 2012. So here is their info: http://www.criminaljusticedegreeschools.com/assault-weapons-in-america/ 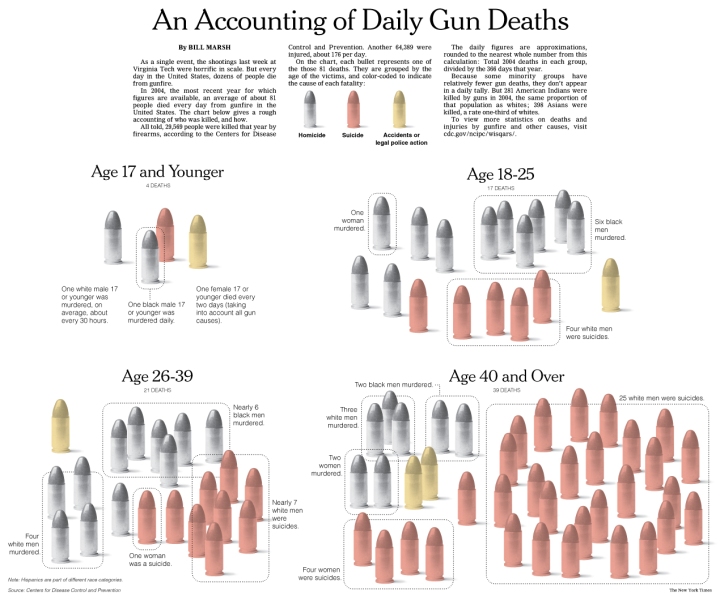 If you were wondering why there is such strong resistance to gun control, it isn’t the 2nd ammendment. It is the people who profit from selling guns to the world: Our military industrial complex.

And more than 50% of Americans will continue to oppose gun control for the same reason they oppose health care reform, maternity leave, and harbor a delusions about how great our education system is performing: We need our reality to be adjusted by facts. Guns are not killing us, our inability to make decisions based on evidence is. 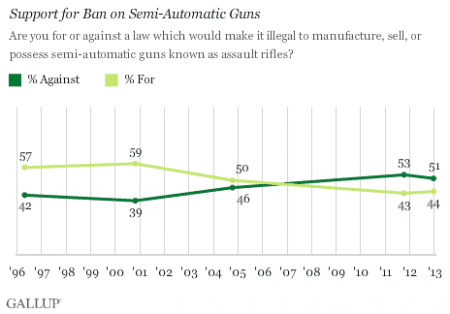 For too long we have let others shape our reality with their “facts”. Education has failed to train the citizenry in how to recognize when others are manipulating them. Distorted views start with people who profit by deceiving us.

We would be a better country if we provided universal healthcare, legal maternity leave, restricted guns, reinstated a mental health system that treats the ill with dignity, and rated our experiments in education against global standards, not local, state, or even national ones. We need to adjust our perception of reality itself. Healthcare is a failure. A non-profit effort to find health cures and provide loving “hearth care” to those in need would free up our economy to grow. That economy is also doomed so long as it depends on war, weapons, and the high cost of security.

Maternity leave, health care, gun violence, education, and our mental health system are all suffering from the same disease. It is a disease with a simple cure: Look outward, at the rest of the world and ask yourself if you are prepared to accept what you see as reality.

Or you can go on believing in the perceived threats that we’ve been told to fear:

But if you do, this distorted perception will then shape your entire world view, eventually killing you as you stand guard against another terrorist attack, while heart disease and cancer take their toll: 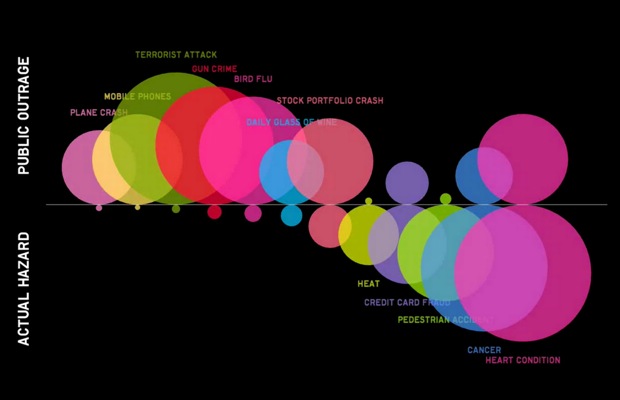 6 thoughts on “Americans, adjust your reality”