For years I’ve wanted to write an algorithm that would predict whether a story is emotionally compelling or not. This would be a major breakthrough for natural language processing. It would also allow us to automatically rate most of the narrative content on the Internet.

While I am not there yet, I am making progress. Using the wisdom of James Pennebaker from The Secret Life of Pronouns I was able to write a story point of view detector that seems to finally work. Not only does it tell what the story’s point of view is, it can also assign a confidence score to its prediction, as well as reliably detect stories that lack a dominant point of view (result is “none”),  or share two alternating points of view (result is “mixed”).

That’s what goes into any good algorithm. If asked to decide between A or B (the simplest choice), there are actually four possible answers: A, B,  Both, or Neither.

After many rounds of testing, I discovered 7 points of view:

This may come as a surprise to anyone who was taught about only three point’s of view (POV). Based on the evidence that people respond differently to these different points of view, they are distinct.

Emotionally Compelling: Mixed or “I” stories

The most powerful point of view if you want to tell an emotionally compelling story, according to The Secret Life of Pronouns is the “mixed” perspective, followed by first person singular (“I”) stories. “Mixed” perspectives alternate between two points of view. And after you realize this, it’s obvious. If you want people to connect with you, and find your point of view credible, you need to spend a little bit of time telling the story from their point of view.

Below is a chart showing what fraction of stories are told from each of these perspectives for three large bodies of narratives. GlobalGiving requires that every project leader report back to donors four times a year for every project. The report is supposed to be informal, conversational, emotionally engaging blog-type writing. And since 2010 we’ve been collecting stories in East Africa written by regular citizens about some specific community effort they witnessed — the Storytelling Project.

Lastly, for the last two years I’ve been getting a “story of the day” by email from a project of my favorite Artist, Jonathan Harris of “I want you to want me” fame. His storytelling site, Cowbird.com, manually curates good stories from the thousands of submissions. Their 812 stories are a positive control group in this experiment, answering the question:

“From what point of view should an emotionally compelling story be told?”

It stands to reason that all of the 812 cowbird stories are good, and their point-of-view (pov) patterns are reflective of what makes for good storytelling as a rule. Let’s compare these three groups:

As you can see from the table, there are dramatic differences. A graph of this makes the differences clearer:

First, 51% of Cowbird stories are first person singular (I, me, my, mine), compared to 4.6% of GG project reports and 7.8% of East African stories. If you want to reach people emotionally, only your own story will work. Instead of you telling his story, have him tell his own story with “I” pronouns.

Second, Not enough (only 1 in 300) GlobalGiving project reports are told from a mixed point view. About 4.9% of East African stories and 2.8% of Cowbird SotDs have a more complex, mixed, alternating point of view. Had these reports been written to better reflect the beneficiary’s viewpoint, they could have raised 50% more money from donors (see below).

Third, too many GlobalGiving project leaders have a “fourth person” pov perspective. “Fourth person” is my name for stories that lack any pronouns at all, or contain a lot of definite articles (a, an, the). They tend to focus on objects over people and relationships. Fourth person (in my algorithm) also uses more organization only jaron (such as the words “ngo”,”cbo”, and “foundation”) than pronouns. All of these make for reports that read like cold blooded reports and not warm, personal, emotionally compelling stories. And if you read on, you’ll see these report raise 30% less money.

Since the point of communication is to affect each other’s lives, we should drop the old style reports in favor or just telling the truth and being authentic. But changing your pronouns won’t make your story better, if it was never your story to begin with. You need to actually help people tell their own stories, and be a steward of their words. For too long we’ve let organizations harvest the words of others to further their (organizational) objectives, and this algorithm will finally allow me to out the worst of the bunch and force them to shape up.

Your English teacher mistaught you; get over it.

When we want to inspire, engage, comfort, challenge and connect with each other, we use short, personal, evocative writing, with a good deal of “I” words. Yet from an early age we are exposed to bad writing, reflecting outdated “beliefs” about what makes writing good. The evidence here shows that good writing is less “professional.”

Which world do you want to build today?  “Professionalized” language gave us global poverty, a financial crisis, and broken politics?

Creative and informal language gave us The Muppets, Neil Degrasse Tyson, and Doctor Who.

I took those project reports from thousands of GlobalGiving partner organizations and compared the dominant point of view in each report with the amount of donations that came from people clicking on the GIVE BUTTON in those reports. The results were striking:

Notes: N = 25,337 published reports. Data includes cases where nobody gave any money after reading reports (23% of total). While reports don’t generate a ton of revenue (50% of reports raised less than $100) $1,077,000 was raised between 2007 and 2014 in precisely this way. This data represents the best example of giving tied directly to feedback loops in international development that I know of.

The results show that the best POV ‘mixed’ is more than twice as effective as the most common POV ‘fourth’:

Project reports with a “mixed” perspective raise 111% more money and get 160% more donations than reports with “fourth” org-centric point of view.

Some caveats: These are not true “controlled” experiments. Nobody forced these organizations to adopt a first or third person perspective. Nor did we randomize what donors saw, as a true researcher might do. It could be that people who are naturally better at raising money tend to choose to use pronouns differently from those who don’t. And it turns out that women write these reports 2:1 over men. And what people talk about has a big influence over how much money one can raise. Here’s an estimate of how project theme affects donor giving after they read a fresh report:

The smartest way to fix your point of view is to talk to others and share their stories, instead of only writing from your perspective. And Globalgiving has for years been helping organizations listen, act, learn better. In fact we’re giving away money to encourage organizations to do this.

There is a huge gap between how most organizations speak and what donors respond to. The green line near the center shows what fraction of stories have each of 6 points of view. The blue and red lines represent more donations and more money raised from a “you”, “I” and “you and I” mixed perspective.

In order to validate the accuracy of this algorithm, I ran 406 of the 813 Cowbird stories through an experiment on Crowdflower. Crowdflower is a distributed tasking site where you pay people a few pennies to do a bunch of simple tasks.

In my task, the person would read two Cowbird stories, select the point of view for each, and then choose which story was the more “emotionally compelling” one. The secret life of pronouns predicts that “mixed” perspectives and “I” stories are more compelling to readers than “you” | “we” | “he” | “they” stories. So I tested our data set and had three people do the test for each comparison. Inter-subject agreement is an important part of seeing whether this task is easy or hard for humans.

Now I know from reading Cowbird that most of the stories actually are “I” stories, and my algorithm predicted 51% of these stories to be first person singular as I expected to see. The “mixed” perspective was much lower – only about 2%. But these are very short stories, and switching perspective isn’t as easy in 100 words, so 2% sounded reasonable.

The results from 406 human story comparisons:

Q: Select the story’s point of view (POV) from these 6 choices:

Q: Of these two, which story was more compelling?

Same result. They agreed with each other 36% of the time. If choosing randomly, they would agree with each other 33% of the time, so that confirms that these Crowdflower humans are really very random and not worth the $16 I paid to test this data set on them. Had I asked 5 interns to do this, I would have gotten more agreement, because they care about agreeing with each other more than the $0.05 I was paying these folks to do a simple (though enjoyable) task.

It also confirms that seeing a story’s point of view is not so easy. If it was trivial, they would have agreed with each other more. Agreeing on which of two stories is more emotionally compelling is much harder, and likely impossible for any algorithm well at predicting what humans like. Even “human algorithms” are terrible at doing it.

A good story is more a matter of taste than of process, but people DO give to projects more often when stories are told from the right point of view – the beneficiary’s.

Afterwards, I tried the new cluster analysis tool from BigML (who as of today allow you to analyze data sets below 16MB for free) These are the patterns that they found:

The largest cluster was reports written by men about education projects in Asia with a first person plural “we” perspective. The keywords in these reports are shown here:

I created a simple tool for anyone to use. Paste your text into the box and it will analyze your point of view. 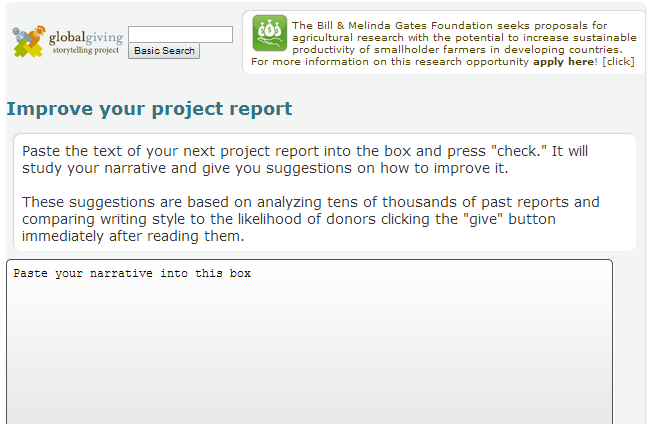 Practicing what I preach

Old habits die hard. I ran my own algorithm against this blog post and it predicted that I am writing from a “fourth person” perspective with an 80 percent confidence rating.

OUCH! I soooo suck as a writer. Or so my computer tells me.

So I went back into this and changed some of my “you” and “we” statements to “I” statements and ran it again.

The reason why I failed? I used too many “its” and “these” and “those” and not enough “I”s in it.