I build tools that help nonprofits and activists listen to what a whole community is saying at once. It builds up the ‘meta story’ out of hundreds of stories. The FCC’s public comments on proceeding 14-28 are a perfect use case.

There were 271,710 public comments on the net neutrality ruling as of today. You can read them one at a time with this link, but the website was incompetently designed so as to make any bulk exporting of comments impossible – or cleverly designed – if you think the FCC never wanted us to understand what EVERYONE was saying.

Impossible is a relative barrier. With brute force (and Amazon’s mechanical turk) I was able to get the most recent 511 comments out and run them through my instant word analysis tool, found at djotjog.com/report.

Here is a taste of what everybody is saying about net neutrality:

The first thing it tells me – by the shape of the overall wordtree – is that there are several very different issues being discussed. In a sense, people are talking past each other, because none of their words overlap in comments.

The second thing to zoom in on are those desnse clusters of words. Dense clusters are where many people are talking about the same thing in slightly different ways – just what you’d expect when a particularly contentious issue is at hand.

Third – net neutrality is at the heart of the map. Connected to it are four main branches of ideas:

A fifth and totally separate branch of these comments are about the two corporations that essentially control all public bandwidth in the United States: Comcast and Time Warner. 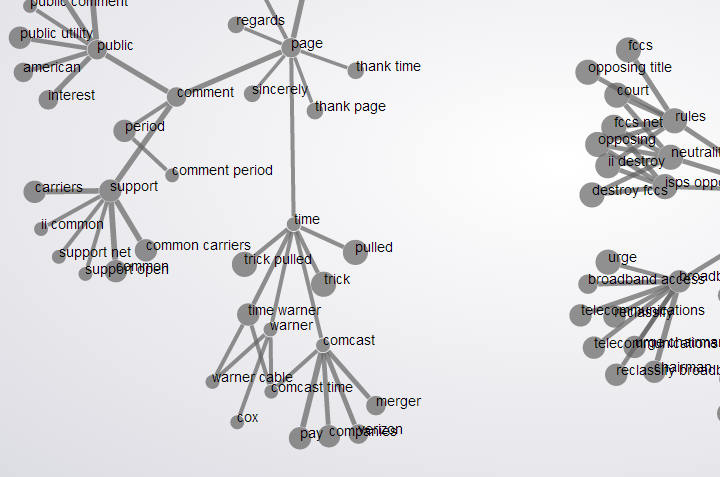 The public seems to single out Time Warner and Comcast in their comments and narratives, mentioning some “trick they pulled” or “this time that Comcast…” did something. The public doesn’t trust these two companies in particular.

Computer written summary of all comments

Djotjog chose these sentences to represent the sentiment of everybody:

While the system of accessing the internet via subscriptions to service providers such as Comcast may give the appearance of a luxury service defined by a free market which we are welcome to avoid should we so choose, this view is, at best, anachronistic and out of touch with the role the internet plays in today’s world. What we all need to understand is this: Internet service providers already charge a premium to content providers in that the more popular a website is, the more they have to pay for bandwidth and traffic from their servers – to the network of computer servers that represents the structure for what we call -the internet- – in other words, the -on-ramp- to the internet. Were we in a country with true competition among internet service providers then the market would be able to respond by choosing the providers who refused to engage in this practice.

When ISPs can slow your site and destroy your business at will, how can any startup attract investors? For Internet service providers, I am lucky to have a choice of two companies. If big, powerful companies can do things like that to WikiLeaks I am sure Internet service providers can and will do the same thing to any organization that rubs them the wrong way, if they are ever allowed to treat some customers less favorably than others. My friends, family, and I use the Internet for conversation and fun, but also for work and business.

As you know, without guaranteed Net Neutrality, internet service providers such as Time Warner and Comcast can provide better service to preferred web sites. When you let ISPs mess with our Internet experience, you are attacking our social lives, our entertainment, and our economic well being. I ask that you treat Internet service providers as utility providers and make sure that all, rich and poor alike have adequate access.

Mouse over each word category for examples of such words.

Compared to other writing samples, this group wrote…

Overall, 5.9 percent of the words in your text were pronouns. Typical reports have 5.6% pronouns and stories have 7 to 9% pronouns. How many times does each type of pronoun appear?

Note: “I” = first singular, “you” = second, “we” = first plural, “he/she” = third singular, “they” = third plural, and various words organizations used to decribe themselves are “fourth” person point of view.

Source: Quid (commissioned by the Knight Foundation) analyzed of a sample of 250,000 public comments submitted to the FCC about net neutrality. Templated responses were collapsed into a single node. (About 30 percent of the sampled responses used “copy pasta” templated language.)

You can also find a curated article on what people are saying about net neutrality on Singlehop.