One of the most significant Science papers on cancer came out this month (Jan 2015). It shows that regardless of all future discovery about the nature of cancer, 65 percent of all people who develop cancer do so simply because we age.

Cell division is imperfect. That’s part of life. It if were perfect, evolution could not occur, and we wouldn’t be here trying to cure cancer. It is an unfortunate side effect of the process that created us, and it cannot be “cured.”

Vogelstein and Cristian Tomasetti used a mathematical formula to explain the genesis of cancer. Here’s how it works: Take the number of cells in an organ, identify what percentage of them are long-lived stem cells, and determine how many times the stem cells divide. With every division, there’s a risk of a cancer-causing mutation in a daughter cell. Thus, Tomasetti and Vogelstein reasoned, the tissues that host the greatest number of stem cell divisions are those most vulnerable to cancer. When Tomasetti crunched the numbers and compared them with actual cancer statistics, they fell along a straight line on the chart.

There was a good linear correlation with strength r=0.81. The square of the correlation (r2) is the amount of Y predicted by X . In this case, Y is the risk of getting cancer and X is the number of cell divisions of this tissue in your lifetime. This, they concluded that this theory explained two-thirds (65%) of all cancers:

There’s more to that collection of dots than just a trend line. Look again: 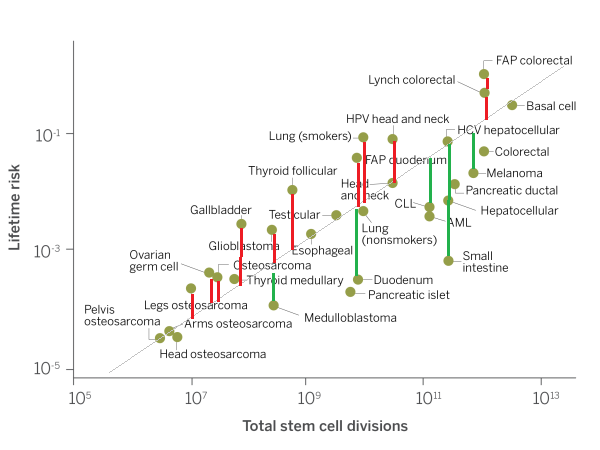 The green lines are a little less intuitive. Cancers that fall below the trend line appear less often than expected because some body process is working to remove tumors in these tissues as they appear. The intestine, duodenum, and colon constantly slough off tissue as food passes through the digestive tract, so maybe any fledgling cancers leave the body this way. Likewise, AML and CLL are types of leukemia – white blood cell cancers. And something about blood cells in fluid make this type of cancer less frequent than expected.

All the cancers with ‘osteo’ with them are huddled in the lower left – low risk and low cell division – because bone cells rarely divide.

The good news is that you can reduce your lifetime risk of getting cancer by up to 35% by eating well, exercising, avoiding smoking and drugs, and having a positive attitude about life and death. But we are never going to prevent cancer the way we ended small pox and (until recently) measles. That would require reversing the ageing process entirely, which is generally a bad thing.