Here are excerpts from my new book, Before You Buy Rental Property: The ethical investor’s guide to buying a rental home.

The United States is one of the more ethnically diverse populations, globally speaking. Here is the breakdown based on 2013 statistics:

These proportions are even closer than they first appear. 15.1% of whites also identify themselves as Hispanics, leaving a mere 62.6% of the population in the “white European” category[ii]. Compare this with France, one of the more diverse countries in Europe:

You can see why America is called the melting pot. But in spite of our diversity, most neighborhoods are homogenous. Each group sticks to it’s own ethnic enclave and forms a dominant group within a few square blocks, while still remaining a minority group overall. This is New York City’s map of little Italys and little Bangladeshes: 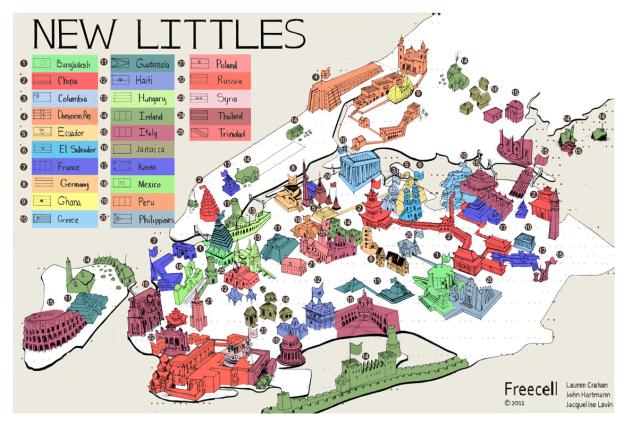 New York City trends aside, most cities in the US have become less segregated since the 1970s. Sociologists use a “dissimilarity index” to measure how over- or underrepresented one ethnic group is in a neighborhood, compared to its proportion in the local population. When every neighborhood’s ethnic makeup matches that of the city as a whole, there is zero dissimilarity. All of the nation’s most segregated cities have become 12 to 40 percent less segregated in the last half century[iii]:

Both of these trends are happening simultaneously. Neighborhoods are getting more diverse as dissimilar groups choose to co-exist, and neighborhoods are continuing to remain “enclaves,” because similar ethnic or economic groups so often choose to live near people like themselves. The balance of these forces in each neighborhood determines whether diversity grows or recedes.

The best illustration of how personal choices transform whole neighborhoods comes from Mathmusician Vi Hart[iv] and “playables” programmer Nicky Case[v]. They published the “parable of the polygons” to illustrate the network effect of one harmless preference. Let’s say you have a neighborhood full of squares and triangles. Each person says, “I wanna move if less than a third of my neighbors are like me.” See what happens:

Every time you restart the scenario with a random assortment of polygons, playing this rule out (making every triangle or square happy) leads to a city of self-segregated, totally isolated square and triangle communities.

The lesson is that we cannot form community if we harbor rigid ideas about who our neighbors ought to be. We must meet and greet our neighbors and learn to feel more comfortable walking down a street with strangers of all colors, rich and poor, immigrant and native. In cities, young people with less money and fewer options are often the trailblazers integrating a community. They fill the “gaps” in the polygon map above.

Gentrification has as much to do with shifting economic classes as it does with ethnic groups.

Adding just a few non-white residents to an all-white neighborhood doesn’t make it “diverse” in practical terms. The psychological effects seen in the polygons game affect the first minority residents to move in. They’ll feel out of place until enough people move in to change the overall vibe.

So how do you define “enough” and “vibe?” This is the fuzziness that epitomizes the clash of perspectives on race and wealth in America. I define them based on the census makeup of that city. When a single dominant group (whites of European descent in the American case) is less than 70 percent, the other groups feel less “out of place” and start to do all sorts of good long-term investing in that place’s future. They join the PTA, vote in local elections, plant trees, start businesses, volunteer at the food bank, and pick up trash lying in the gutter. They plant roots. When it doesn’t feel like home, they engage less.[vi] The neighborhood doesn’t grow, and fails to evolve into a community.

The tricky problem is that whites see a few minorities move in and call that “progress.” And from their perspective, they are right. In 1960, a fifth of all census tracts had exactly ZERO black residents.[vii] Today, all tracts are somewhat integrated. But to the people moving in, this is just the beginning of progress. For them, a neighborhood with 90 percent white people is still a “white neighborhood.” It isn’t diverse until that fraction drops to around 70 percent. Counting from the other direction, a “black neighborhood” or “Hispanic neighborhood” is one with over 50 percent black or Latinos, respectively. Different groups have different comfort levels for co-existence with “the other,” making this difficult to nail down with a one-size-fits-all definition.

Gentrification is really the absence of a community

The real question is not who lives beside whom, but whether people from different backgrounds are forming a community. Triangles and squares have only one defining characteristic – race – and therefore is unsolvable. Real people have many facets to their identity. Similar income, culture, careers, tastes, and aspirations can give the problem sufficient dimensions to be solvable. Individuals form communities, rather than factions, when they make a conscious effort to be a part of everyone’s lives, not just the neighbors that look like them.

This is what I mean by “solve for X.” If we think about ourselves as more than just a racial or economic status, we can and should create communities. Every community we build will have a different solution to the equation, but they will all be healthier and wealthier.

Ethnic diversity is now correlated with faster home value appreciation. Neighborhoods with higher ethnic diversity — including Latinos, Asians, African Americans and others — experienced higher housing appreciation over the past decade[ix].

When gentrification is evil

If corporate developers focus exclusively on high income when they re-engineer a city neighborhood, tearing down public housing to put up expensive condos, they destroy community. They leave no poor people behind. Even people who live nearby the projects are forced to move, as the higher property values can double or triple their property tax burden overnight. This is evil.

One person pointed to boarded-up windows and doors of units that were no longer inhabited. “The government is purposely making these units uninhabitable,” she said. “It’s another tactic they’re using to move people off the property.”

Another resident said, “there’s been nothing effectively implemented in our communities to uplift people. We’ve got a lot of liquor stores and fast food places that are bad for our health. But we don’t have services that would help people in public housing maybe form a small business and hire people in the neighborhood. We have a lot of social service programs, which do help, but nothing that’s going to effectively deal with the issue of crime.”

After one resident moved in, she was recruited to join the city’s six-person planning development team – made up of two Barry Farm residents, two members of the DCHA and two people from the deputy mayor’s office. She ultimately quit after concluding they weren’t interested at all in her input and only wanted residents on the team to give the appearance of resident approval for development plans. She said, “In one instance, DCHA offered to pay residents $25 to fill out a survey with questions that, depending on the answer, could instantly disqualify people from public housing.”

“The government has divested in these places for so long that some of the people who live there actually start to believe that it needs to be shut down,” another said. Dominic Moulden, an organizer with the grass-roots organization One DC, agrees. “If anything is wrong with Barry Farms, it’s because the government didn’t take care of it.”

One economist found that stories of city governments divesting in poor, black neighborhoods like Barry Farm are the norm. Statistically, they are “representative” of trends across the country:

In cities with a higher share of the population who have moved locally within the urban area in the last 5 years, there are significantly fewer community improvement organizations per capita. The organizations present spend less. This is true even after adjusting for differences between cities in the level of affluence, ability to pay (as measured by the average household income), the structure of the local housing market (as measured by the share of renters), and the level of local need (as measured by the poverty rate). There are only two variables that are statistically significant in every specification of the model: average household income and the measures for risk of displacement.

This underscores a central point: diversity is not the problem, but rather, community instability.

Conflating this trend in income with trends in diversity leads to misleading headlines. A recent Slate article claimed that “gentrification is just a myth:”

This statement does not conflict with the other findings. It affirms that forces which diversify communities also strengthen them, while others show that American cities are threatened when forces transform all the property in a neighborhood into homogenous units for similar-income dwellers. Plowing over and erecting seas of condos equals income segregation. And rising city-wide income does not benefit all peoples equally. In recent decades, among the American cities that grew the most, the economic benefits almost exclusively went to white populations. Black income grew little if at all.[xiv]

This book is not a how-to guide for “redevelopment.” I don’t advise “flipping a neighborhood,” but rather, “investing in a community.” The difference is aiming for continuity, so that ten or twenty years from now, the neighborhood is still diverse, and declassified, and growing in value. It is the only reliable way to achieve sustained growth of your investment.

Next: Why your home was probably worth more a hundred years ago.

[i] Note: If the 77.7 percent of Americans who self-identify as white, 15.1 percent of these are also Hispanic. For this reason and similar overlapping groups, the totals for this chart exceed 100%.

[vi] Economists have taken this phenomenon seriously as the core problem with gentrification. http://web.williams.edu/Economics/ArtsEcon/library/pdfs/WhyIsGentrificationAProbREFORM.pdf

2 thoughts on “Gentrification: Solve for X.”