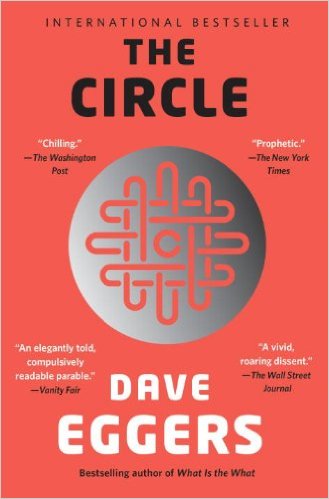 I found the second half of this book rushed and willfully ignorant of the irony within the Circle’s system. So, picking up from page 402, here’s my preferred ending:

The great hall was raucous with a few thousand Circlers. The rest had been asked to stay at their workspaces, to demonstrate to the world how Demoxie would work across the whole company, with Circlers voting from their desks, from their tables and phones and even retinally. On the screen in the Great Room, a vast grid of SeeChange cameras showed Criclers at the ready in every corner of every building. Sharma had explained, in one of a series of zings, that once the Demoxie questions were sent, each Circler’s ability to do anything else — any zing, any keystroke – would be suspended until they voted. “Democracy is mandatory here!” the spokesperson wrote, and added, much to Mae’s delight, “Sharing is caring.”

And then the Demoxie logo appeared on the screen, and the first question arrived below it.

Question: Should the Circle offer more veggie options at lunch?

A zing came through from Bailey (the CEO): It shall be done.

The Great Hall shook with applause.

… The next question was preceded by a sober instruction: Imagine the White House wanted the unfiltered opinion of its constituents. And imagine you had the direct and immediate ability to influence U.S. foreign policy. Take you time on this one. There might come a day – there should come a day – when all Americans are heard in such matters.

The instructions disappeared, and the question arrived:

Question: Intelligence agencies have located terrorist mastermind Mohammed Khalil al-Hamed in a lightly populated area. Should we send a drone strike to kill him, considering the likelihood of moderate collateral damage?

Mae caught her breath. She knew this was a demonstration only, but the power felt real. And it felt right. Why would the wisdom of three hundred million Americans be taken into account when making a decision that affected them all? May paused, thinking, weight pros and cons. The Circlers in the room seemed to be taking the responsibility as seriously as Mae. How many lives would be saved by killing al-Hamed? Thousands? The world would be rid of an evil man. The risk seemed worth it. She voted yes.

The full tally arrived after one minute, eleven seconds: 71 percent of Circlers favored a drone strike. A hush fell over the room.

In the silence a voice came into her head through the ear buds.

“You can’t do this. Your mandatory voting thing – it’s the last step towards closing the Circle, and that can’t happen!” He said.

“Isn’t that the point? That’s been the goal of the Circle since the beginning!”

“Mae, for me at least, this kind of thing was the fear, not the goal. Once all government services channel through the Circle, you’ll have created a tyrannical monopoly.” There was uncharacteristic terror in Kalden’s voice.

“Do you know who al-Hamed really is?”

“No. But with total transparency, it doesn’t matter.” she said back. She looked around. No one seemed to be watching her. They were looking out the giant panes of floor to ceiling glass.

There was something strange in the sky overhead. Like a swarm of electronic bees, growing in size. They were approaching. The sound of a supersonic howl echoed in the distance.

Kalden returned into her earbud. “It’s me. And you’ve killed us all. That was no simulation, Mae.”

Before Mae could duck and cover, the approaching drone kamakaze missles showered the campus of the Circle in deafening explosions. There was a bright flash, and Mae was no more.

The next morning the remaining 10 percent of the Senate that had refused to “go totally transparent” held a press conference against the backdrop of smoldering craters on what had until recently been the tech campus of the most powerful company in the history of capitalism. Beaming and smiling in front of the cameras, one of them explained the scene.

“Y’all saw it for yourselves. With an audience of billions, these Circlers voted to unleash a drone strike against al-Hamed, a criminal mastermind who was going by the alias of Kalden. He had hacked into the Circle and was about to use it to launch his own attacks against the US, like Osama Bin Laden had done in his day.”

“But how could they have known that?” a reporter asked.

“We gave them all the information that a citizen in Demoxie would need to make the decision. Had they empathized with the collateral damage, and voted on on the side of caution, not trusting their omniscient powers, they’d still be here. We didn’t kill anybody. They ordered the strike on themselves.”

“But aren’t you hipocrites, not going transparent yourselves?” another asked.

The senator laughed at the question. “Hell no!”

The press watched in silence, stunned.

He continued. “Why do you think the three geniuses running the Circle never turned the 360 degree 24/7 cameras on themselves? Because they knew that it’s the illusion of transparency that people trust, not the actual thing. We’re here to explain what happened, how it happened, why it happened, in a truly transparent way, so your readers can make up their own minds.”

“Every person who voted for the strike thought he or she had total information. That hubris is always present in every system that tries to perfect itself. No, give me imperfect democracy over DeMoxie any day.”

Another Senator stepped in, saying, “I think he means to say, we’re for direct democracy, but only under the conditions when it can be truly fair and open and not controlled by any one company or agency that could control the outcomes for its own ends. Companies would need to play by the same rules as politicians, and no one is omniscient. No system perfect. Sometimes taking a breath is the best thing.”

Looking down from the afterlife, Mae felt pretty foolish about everything.