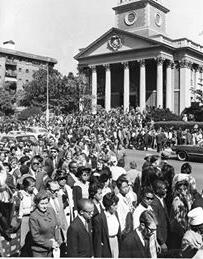 In 1963, All-Souls Unitarian Universalist church was a rally point for black and white civil rights advocates alike. This photo was taken on the morning of August 28th, 1963 – before the March on Washington. They spoke for justice when others stood by in fear.

In 1965 associate minister Jim Reed was beaten to death in Selma Alabama, minutes after phoning his wife and kids to tell them he was safe. Pres. Lyndon Johnson personally cited Reed’s death in proposing the voting rights act the following week.

Last month those laws were neutered by the Supreme Court. Rather than admit voting rights are being denied in all 50 states today, they eliminated rules that singled out the most abusive states in the South. And within 24 hours, several of those states passed laws that would result in fewer people voting.

I’d like to see voting rights protected in ALL 50 states, a proactive door-to-door effort to give every citizen free photo IDs (like the census), and $50 fines for NOT VOTING, so that everyone votes and nobody is ever denied again.

Direct action in the Civil Rights Movement took off in 1960 when four black men sat at a whites only lunch counter in Greensboro, NC. One of them had been pitching the idea for eleven years to a group that was working to change Jim Crow Laws, but didn’t think that a “sit in” would change anything. They talked for 11 years before trying it, and sparked a movement of copy-cat sit ins across the country. It “went viral” in 1960, even though it had been tried by many others as early as 1939.

“The Arc of the moral universe is long,” Martin Luther King Jr. said, “but it bends towards justice.”

Most of the arcseconds along that path are spent in committee.

We are seldom reminded of the decades that people struggled without being noticed. In the 1950s A. Powell Davies preached against segregation at All-Souls Unitarian in Washington, DC – my church!  Through renown for his sermons, it was more likely his action that changed history.

In 1954 the church asked a 1900 member all white boys club that was meeting at the church to integrate. They refused, and moved out of the neighborhood. So A. Powell Davies raised money and started the Integrated Columbia Heights Boys Club. Because of Davies’ intense sermons, the church attracted many influential leaders to the pews on Sunday. Five of the nine supreme court justices attended regularly (the Warren Court). And later that same year, Brown vs the Board of Education was decided unanimously in favor of integrating schools.

Few people saw the connection back to this church, but I believe that when these justices saw the minister integrate his own church programs they were inspired to do the morally right but politically dangerous thing and strike down “Separate but Equal.”

It still took two more presidents and another decade to be enforced. Law is only the first step; action and experimentation must follow.

And just as it took 50 years to unwrite a century of discrimination laws, the process of rewriting those insidious laws will be slow and subtle. It is the slow creep of inequity that lulls good people to sleep.

“Don’t sit there getting dumb, fat, and happy, thinking you are free.”  — Cory Booker

Every citizen’s birthright is a free photo ID and a vote. We have money for the census but lack the political will to provide everyone with an identity that can protect them from disenfranchisement.

Martin Luther King Jr’s brilliance was being able to dream above the violence that others threatened him with every day. He responded to hatred with unlimited possibility. His dream attracted “white allies” who joined the cause and died for it. He dared to imagine a black president when others were preparing for an inevitable race war. Yet he warned that change would not “roll in on the wheels of inevitability. ” His dream is alive, but it is still not real in America or in the world.

3 thoughts on “Lessons from the 1963 March on Washington”