Take a look at each state’s natural “regions” as the people living there describe it, compared to the congressional boundaries. 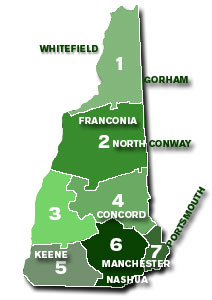 New Hampshire matches up somewhat, except where most of the people live – around Manchester and Nashua.

North Carolina is very different. The four districts where the most people live also have boundaries with the highest fractal dimension. Yes, there’s a mathematically sound way to calculate how rough the edges are. The more bends in the boundary, the higher its fractal dimension. There is more “coastline” on districts that are Gerrymandered. And two NC districts were recently overturned by a Judge. The Charlotte Observer explains:

The 1st Congressional District according to the lawsuit, is “akin to a Rorschach inkblot” that weaves through 24 counties, containing only five whole counties. The district is mostly in the northeastern part of the state and includes Durham, Elizabeth City, Roanoke Rapids, Rocky Mount, Goldsboro and New Bern.

The length of the district’s perimeter, according to the lawsuit, is 1,319 miles – “almost precisely the distance from Chapel Hill to Austin, Texas.”

The 12th Congressional District is 120 miles long but only 20 miles wide at its widest part. The district includes large portions of Charlotte and Greensboro connected by a thin strip — “averaging only a few miles wide” – that follows Interstate 85.

South Carolina’s seven congressional districts match the 10 historical regions pretty closely. But there’s no need to Gerrymander in a state with a homogeneous voting population. SC is a Republican stronghold. Instead, lets look at battleground states: 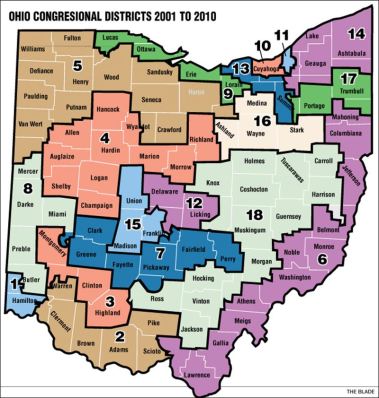 Ohio’s state-level administrative districts don’t match their Federal voting districts. You can see how the revised districts continue to diverge from any logical analogs for boundaries based on cohesion of the people living there. In fact, many districts seem to be increasing their “Coastlines.”

Colorado is close, except where most people live. But Colorado has proportional representation when voting for president, so the pressure to Gerrymander might be less. It splits its votes instead of giving all to one presidential candidate or another. 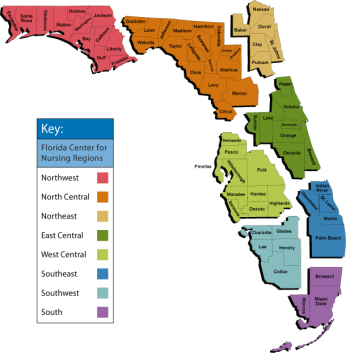 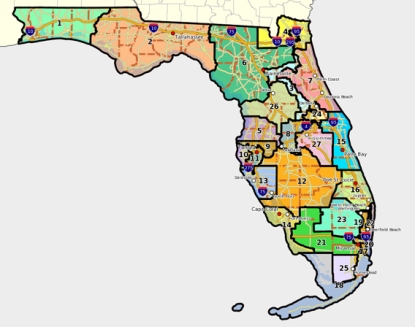 Florida has been redistricted recently. But their rationale is the tail wagging the dog. Instead of analyzing which party wins “safe seats” or even trying to maximize the number of contestable seats, as shown here;

We should be minimizing the coastlines of each district and using other existing maps of natural boundaries as a guide, such as which boundaries the local power company uses for dispatching repair trucks, or at least matching up state districts with Federal ones. These implicit measures of social and geographical cohesion are going to be harder to manipulate than any political analysis of likely outcomes.

The United States is a nation of “safe seats” because we’ve Gerrymandered our borders to avoid having a discourse about competing ideas.

The 2012 election, when broken down by county, shows that most counties are highly partisan to one party or the other. What it neglects to highlight is that voting districts, and not counties, determine the boundaries of how votes are tallied.

The above map tries to show that, but there isn’t enough detail to map out many districts whose “coastlines” are too twisted to see.

One thought on “Gerrymandering easy to fix”