In my daily research for my novel, I speculated that media coverage of an economic crisis that leaves no immediate trail of carnage would not gather the media attention it deserves. Rather, because the crisis I’m thinking about affects life as we know it and the foundation of our whole economy, it would instead leave a trail of the marked absence of media coverage so as to not cause a “scare.”

I was writing fiction, but fiction is just a pack of lies in search of the truth. Check out these facts:

US oil production peaked in 1971

The scientist that predicted this, Herbert, was ridiculed and ostracized by the industry. But his prediction was accurate, as shown below, albeit the decline was slightly less steep than he predicted due to more aggressive post-peak exploration.

Over that same time, book mentions of Peak Oil took a noteworthy decline between 1955 and 1970. About 15 years before the crisis, nobody wanted to put that taboo phrase “peak oil” into print. But as soon as the peak had past, everyone was writing about it (source: google ngrams).

This is the consensus view on what year the world will produce the most oil in history.

And this is the google trends for the phrase “peak oil” on searches and in the media:

So if 1971 US peak oil is a model for what we can expect, we have begun our 10-15 year media silence period about the imminent decline in world oil production. That is the best case scenario. The worst case scenario is that the global consensus is right and this is the decade that oil production declines and the price of everything from fertilizer to medicine skyrockets. I tend to think that it will be 2016-2018, given the repeat of aggressive oil exploration that accompanies an industry-wide freak-out about the end of oil.

This desperation to find more oil leads to an artificial bubble in the apparent availability of oil for various reasons, which I exploit as a plot device in my novel. The most recent example was Brazillian mining tycoon Batisto, who gained and lost $34 billion dollars over the last 4 years in an attempt to drill for oil and then convince the rest of the world that he’d found a huge reserve:

Here is the Businessweek story in brief about Batista

Eike Batista, the son of a billionaire, set out to make something of himself. He vowed to find gold and start a mining company at age 24 in Peru. He succeeded in starting 5 mining companies before turning his attention to the Brazillian oil market.

With Mendonça (former head prospector at Petrobras state oil company) at the helm of his new company OGX, Batista boasted that he now had a “dream team” that would discover deposits that Petrobras had missed. They bid double to quadruple what others offered for offshore Campos Oil fields, adjacent to established fields that had been historically hard to exploit. All the other companies low-balled their bids because their analyses showed it would yield less oil than OGX believed.

OGX announced it was aiming for more than 1 million barrels a day by 2019—which would have amounted to almost half of Brazil’s total output. They announced potential resources of 4.8 billion barrels, more than a third of Petrobras’s proven reserves. OGX had yet to drill a single well.

Batista’s super port at Açu was the capstone of his master plan—a virtuous cycle in which his shipping unit OSX Brasil paid rent to his LLX Logistica unit, while OGX produced natural gas for MPX Energia, which would supply electricity for his iron-ore mines. “If the port wasn’t mine, the port guy would charge me half of my profits,” he said in an interview with a German journalist. “You better control the whole system.”

He attracted many investors, including BlackRock, Pimco, GE, Abu Dhabi’s sovereign wealth fund, Mubadala Development, IBM (IBM), and even ExxonMobil (XOM), which teamed up with OGX on bids for offshore oil leases.

An independent audit report showed that reserves in the company’s fields looked less a sure thing than earlier reports indicated, with a good portion of them marked down as “prospective” instead of “contingent.” Essentially, recoverable reserves simply were not as certain as they once seemed to be.

Unable to find drilling partners, Batista and OGX in May 2011 turned to the bond markets and—despite concerns about its reserves—the “smart money” poured in. The company raised $2.6 billion for its exploration campaign and began to tout a 100 percent success rate on its Campos test wells.

Overextended and not producing any commercial oil yet, they tried to sell off some of their fields, but found no takers. Batista called sale of a nearby field owned by competitor a “positive development,” saying he could get a better price after additional exploration promised to unveil more hydrocarbon riches.

A year later its own analyses showed most of the crude oil was locked in complex subsea geologic formations, but OGX said 87 percent of its drill sites would be producing oil. (UPDATE: After writing this, I happened to interview the founder of a large oil exploration company. He said that typical success rates at new drill sites are 32 percent. 87 percent was still too high to be trustworthy.)

Mubadala – Dubai’s Sovereign Wealth Fund – One of the world’s largest investment funds sunk $2 billion into EBX (the OBX holding company) for a 5.63 percent stake, buying into the strategy. It boosted EBX’s credibility despite no oil making it onto the market yet.

According to the people around him, Batista couldn’t help inflating expectations. He had succeeded in all of his first five mining companies; why wouldn’t he ultimately succeed in the oil industry?

There was incentive to take only good news to Eike because he had a tendency to shoot the messenger.

In 2013 OGX announced it was abandoning a group of fields, turning back the most expensive leases to the government. The oil well that started at 15,000 barrels a day would be shut in 2014. If OGX fails to pay off its $3.6 billion in bonds it would be among the largest corporate defaults in history.

“Never lend to an oil company that not’s producing oil.” OGX debt is 11 times larger than its market value, and its founder has lost $34 billion dollars, and is merely worth $300 million now. 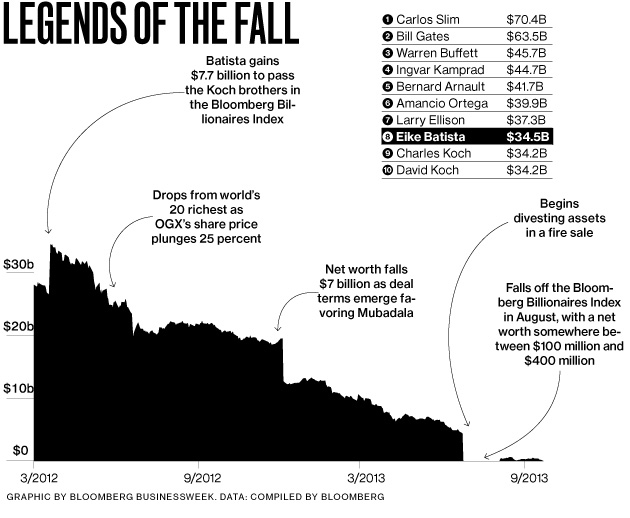 Media is a useful predictor of hype, and thanks to google search trends and google ngrams (100 year historical samples from books), we can actually detect crises that are hidden precisely because those in power find ways to prevent newspapers and television networks from reporting on them. The 1971 US peak oil crisis was accompanied by silence in books, and the 2016 global peak oil crisis looms ahead, supported by a similar pattern of media silence.

This matters a lot because capitalism requires constant growth for prosperity, and without cheap oil there can be no real growth. We will need to look for ecnonomic paradigms that work in a zero-growth world, and we have none. That, in part, was the subject of a Bellagio Rockefeller Foundation convening last week, and I could only find this one mention of it on the Internet. We should be having a broader conversation about Capitalism’s Act Two.

The only intelligent discussion of how Capitalism has evolved through similar crisis is this RSAnimate talk: