Planet Money has an excellent episode, 616: How solar got cheap. I see a parallel here with the recent interest in listening to the world’s poor, citizen reporting, and “feedback loops” in general. Most people think it is about enabling conversations with new technology. But, like the solar panels story, I think it will be about rethinking the conversation and the context that makes it ultimately work.

Quick recap: In the podcast three things happened between 2009 and 2013 that changed the solar market:

What didn’t change: The Technology

I shared this with my team at KeystoneAccountability as an allegory for the feedback business. We are wrestling with the pressure to deliver community feedback to Ebola actors in Sierra Leone and Nepal earthquake recovery actors at lower cost. There’s a tendency to focus on better technology as the answer. I suspect it is more about financing, marketing, and process enhancements around existing technology.

One of them commented, “they [Planet Money] left out that panels have also became a lot more efficient in the last few years.” To this, I replied with some charts:

The efficiency of solar panels has increased every year, but no dramatic improvements have happened since 1996, and they are not projecting any breakthroughs this decade.

For comparison, this 20% increase in solar cell efficiency in the last half century is pretty small compared to the 10,000,000-fold increase in processor power: (note the logarithmic scale). 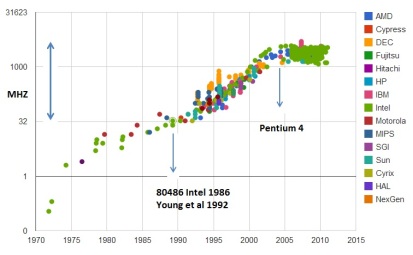 Solar has a theoretical maximum efficiency of 95% on Earth, and we’re hovering around 25% in 2015. But it turns out that we didn’t need to get much more efficient to make solar a viable alternative energy source. The cost of solar energy per Watt decreased dramatically starting in 2009 – when the Chinese flooded the market with cheap panels.

Thus, economics and not better technology has caused the price to plummet. This has the effect of making solar look like a more efficient technology, but the energy conversion efficiency hasn’t changed.

Only the way that people think about it and pay for it has changed!

Listen to that podcast!

Despite these impressive declines, the United States still has the highest prices where data is available for residential and commercial solar. US installed PV prices are more than double German prices for systems under 100 kW, and much higher than prices in the UK, Italy and France.

3 thoughts on “Solar: the problem was never the technology”